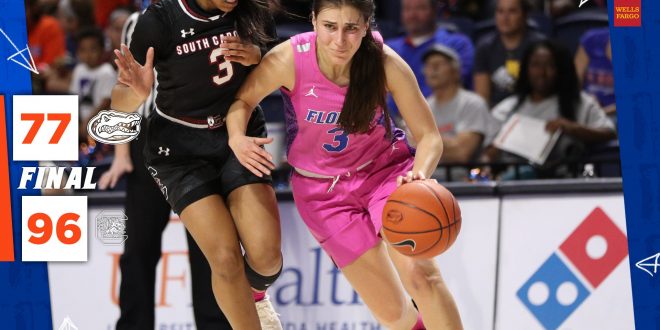 In Sunday’s match-up, the Gators played for a cause and wore their pink jersey for the first time all season. They dedicated this game to supporting, Play4kay cancer survivors.

Another first for UF was having five Gators end the game with a double-digit scoring game. The leading scorer was senior guard Funda Nakkasoglu with 19 points and it was also her 19th game of the season being in double-figures. Following right behind were teammates Delicia Washington with 12 points and 10 rebounds. Danielle Rainey with 15 points, Zada Williams 14 points, and Kiki Smith 10 points.

In fact, Florida scored a season high of 77 points.  Although their offense was hot, defensively the Gators had a hard time containing South Carolina. They allowed the Gamecocks to end the game shooting 59% from the field.

The Gamecocks also had multiple players score double figures in yesterdays’ match up. Leading this group was Alexis Jennings who scored a game-high 22 points; 17 of her points came in the third quarter.

The three other players for South Carolina who landed in double figures were senior guard Bianca Cuevas-Moore who finished the game with 19 points, Destanni Henderson with 18 points and Tyasha Harris with 11 points.

The Gators are on the road heading to Baton Rouge to be hosted by LSU on Thursday.

This is the first meeting between the two teams this season. The Tiger fall 6-6 in the SEC as the Gators come into this one 2-10.