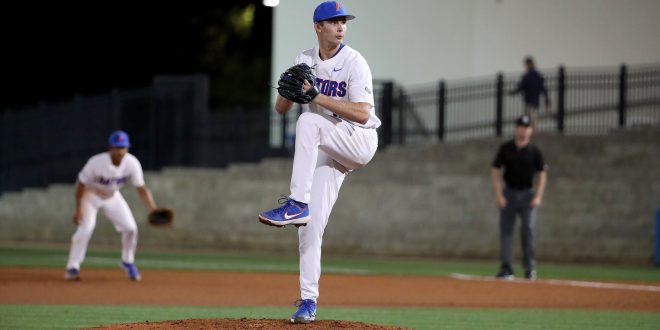 Gators baseball continues to struggle in loss to UNF

A slow start for the Gators created a deficit that Florida wouldn’t be able to overcome.

The No. 3 Gators continued to show signs of an early season struggle after falling to the North Florida Ospreys 7-1 Wednesday night in McKethan Stadium.

Florida freshman on the mound

Christian Scott started off on the mound for the Gators. Through two innings Scott pitched three strikeouts and gave up six hits for two runs.

Up next on the mound for the Gators was right-handed pitcher Ben Specht. Through two innings, Specht threw for six hits giving up one run.

The standout performer on the mound was David Luethje. In Luethje’s first career appearance he pitched three perfect innings, giving up no hits or runs.

Luethje commented on the confidence that gained after his first appearance at the mound.

Last up on the mound for the Gators was Nick Pogue. Pogue pitched recorded five strikeouts, three hits and four runs throughout two innings.

Florida made uncharacteristic mistakes on defense, putting themselves into an early 0-3 deficit against UNF.

The Ospreys got things rolling early in the first inning with back to back hits from outfielder Wesley Weeks and Chris Berry. A single from infielder Jay Prather brought in the first run of the night for the Ospreys.

The Ospreys carried their momentum into the second inning, with a home run from infielder Tanner May.

In the third inning, the Ospreys again began the inning with a home run from outfielder Tanner Murphy. After three innings the Ospreys led the Gators 3-0.

#Gators get a pair on and McConnell drives one to the wall in deep center but it's tracked down.

Any other part of the park and that one is outta here. Alas, we get nothing.

Improvement at the plate

After two scoreless innings, the Gators got things going in the bottom of the sixth inning starting with a double from Nelson Maldonado. A sac fly from Cory Acton brought Maldonado home to put the Gators on the board.

At the top of the seventh, the Gators trailed the Ospreys 3-1.

Junior catcher Santino Miozzi went two for two on the night, hitting singles in both the fifth and seventh innings.

Head coach Kevin O’Sullivan spoke about the improvement to his team’s offense in the second half of the game against UNF.

Despite the Gators turn around at the plate, the Ospreys earned four runs in the top of the ninth to secure the 7-1 victory.

Florida will host a three-game series against the Miami Hurricanes beginning Friday, February 20 at 6:30 p.m.

In their last series matchup against the Hurricanes, the Gators pulled away with a 2-1 series win in Miami.

Previous Gators Get Statement Win Over No. 13 LSU
Next Miami Heat in search of a playoff spot in second half of the season