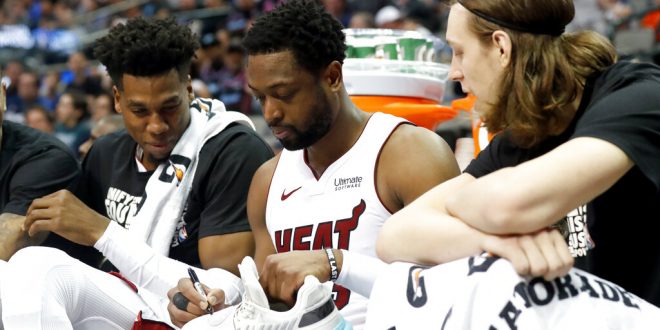 Miami Heat's Hassan Whiteside, left, and Kelly Olynyk, right, watch as Dwyane Wade, center, autographs his shoe before giving it to a young fan late in the second half of the team's NBA basketball game against the Dallas Mavericks in Dallas, Wednesday, Feb. 13, 2019. (AP Photo/Tony Gutierrez)

The Miami Heat resumes its season Thursday after the All-Star break, looking from the inside out. Miami (26-30) sits in the ninth seed before taking on the fifth-seeded Philadelphia 76ers. Miami is 15-14 on the road, with Thursday’s game being the only regular season game in Philly this season.

Philadephia (37-21) beat Miami 124-114 at American Airlines Arena on Nov. 12, when the team did not have Jimmy Butler, Tobias Harris and Jonathon Simmons. The 76ers traded away former No. 1 pick Markelle Fultz and guard Zhaire Smith is unlikely to play this season. Hence, the Sixers are trying to compete now and focus less on player development associations they have dwelled on the last few seasons. The Heat looks to return into a playoff spot using a combined effort of healthy veterans and exciting young players — with Ryan Anderson being the only new blood in the rotation.

A Return to Focus

A lot of the talk surrounding Miami has been about the team’s past and future this season. Headlines point to Dwyane Wade’s “One Last Dance” or “One Last Lob” to LeBron James in the NBA All-Star Game. Even Pat Riley spoke to Dan Le Batard about his feelings regarding James’ returning to Cleveland and why he’s staying on as the team’s president.

“Maybe that’s why I’m not going to retire,” Riley said after telling Le Batard that Wade never gave up before coming back to win the 2006 NBA Finals. “I ain’t going out this way, until we win another title.”

These storylines remain as Miami tries to focus on turning around mediocre play on the court. The team is 111-109 since 2016-17, playing almost an identical roster. Getting back in the win column while in the City of Brotherly Love will be no easy task though.

Miami is third in scoring defense (105.7 ppg), while Philadelphia is third in scoring offense (115.9 ppg). The teams also sit sixth and seventh in the NBA in rebounding, with both averaging over 46 a game. However, the teams are on opposite sides of the rankings in field goal percentage, as the Heat rank 26th in the NBA (44.6 percent) and the 76ers rank sixth (47.5 percent).

Will Miami be able to score enough to hold off Philly? Can Philly outscore the Heat despite giving up over 112 points a game? The answers to these questions can be affected by looking at who is available Thursday night.

While the 76ers deal with Joel Embiid (knee), Furkan Korkmaz (knee) and Shake Milton (hand) out heading into Thursday, the Heat gets back two pieces of the puzzle. The team and Head Coach Erik Spoelstra announced that point guard Goran Dragic and forward Derrick Jones Jr. are returning into the rotation. Both players were full participants in practice Wednesday.

Dragic averaged 15.3 points per game and a team-leading 4.9 assists per game in just 14 games this season. On the other hand, Jones Jr. is scoring 7.4 points in over 18 minutes — a 16.63 player efficiency rating, too.

However, with a six-foot-10-inch Ben Simmons at point guard for Philly, is it wise to go away from defensive asset Justise Winslow? He has thrived in the position, scoring a career-best 12.4 points per game.

Embiid out gives Heat center Hassan Whiteside a good opportunity to dominate inside. The seven-footer is averaging 12.8 points, 12.4 rebounds and 2.1 blocks in 50 games this season. If Whiteside cannot get it done, Kelly Olynyk or Bam Adebayo can spread the floor more.

If guys go cold, Spoelstra will have more players to work with — and possibly more ways to win.

Tip-off is set for 7 p.m. at the Wells Fargo Center.