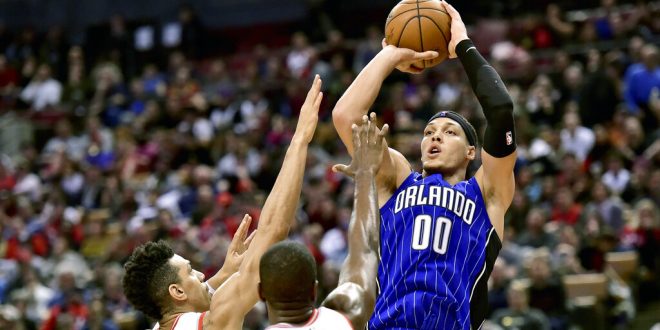 Magic blowout Raptors on the road, move within one game of playoff spot

With the second half of the season underway, the Orlando Magic have come out the gates hot and are determined to get into the playoffs for the first time since 2012.

The Magic followed a disappointing home loss against the Chicago Bulls with a dominant road victory against the Toronto Raptors. Terrence Ross led the way as he scored 28 points against his former team. All-star Nikola Vucevic was effective yet again recording another double-double with 23 points and 12 rebounds.

GOT THE W IN TORONTO!! pic.twitter.com/qHcZm2oDvy

Leaning on a Loaded Frontcourt

If the Magic are going to continue winning, they’ll need continued production from their frontcourt. Aaron Gordon needs to step up in the final months of the season,  while Vucevic will have to continue his high production play.

One player the team will count on is Jonathan Isaac, the sixth overall pick of the 2017 draft. As the season has gone on, he’s continued to receive an uptick in minutes. Isaac was drawing comparisons to Kevin Durant out of college but has yet to live up even close to that billing, outside of his last 10 games.

Over the last 10 games, Isaac is averaging nearly 14 points per game including a five-block performance against the Atlanta Hawks. Take a look:

After numerous losing seasons since the departure of Dwight Howard, the Magic are finally back in playoff contention and may have a young core to build around.

With the emergence of Issac and the strong play of Gordon, the Magic have two solid young options for the next few years. With Mo Bamba still needing time to develop, holding on to Vucevic will be key. He’s expected to be a pricey free agent, but Orlando has the cap room to resign him if he chooses to stay.

With Orlando expected to fall in the middle of the first round in the 2019 NBA draft, there are a few prospects that could fall to them which would make this team especially intriguing. This includes Jontay Porter, Bol Bol, and P.J. Washington.