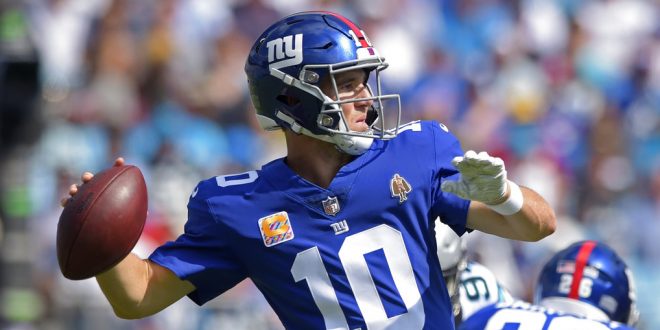 New York Giants' Eli Manning (10) looks to pass against the Carolina Panthers in the first half of an NFL football game in Charlotte, N.C., Sunday, Oct. 7, 2018. (AP Photo/Mike McCarn)

Will Eli Manning Be Back With Giants?

The New York Giants had a rough 2018 season, and many are blaming the 5-11 record on quarterback Eli Manning.

Speculation has been heavy since the end of the 2018 campaign with the possibility of Manning, the 38-year-old veteran, leaving the Giants. On Wednesday, head coach Pat Shurmur and general manager Dave Gettleman fielded questions at the NFL Combine.

Shurmur believes that Eli Manning made the team better when he was on the field. Because of this, the Giants head coach was adamant in saying that he wants Manning to be the starter in 2019.

“I think Eli can help us win games,” Shurmur told the media. “He can play at a very high level.”

The problem is, it’ll be his 16th season when he takes the field in 2019. It’s getting close to the end of the line for Manning, and it would make sense if the team wanted to part ways as well.

GM Gettleman On the Fence About Manning’s Return

Interesting. Dave Gettleman not as willing to commit to Eli Manning in 2019 as Pat Shurmur was. pic.twitter.com/gaOzirqfXf

Giants general manager Dave Gettleman wasn’t quite as confident as his head coach was to the media.

Gettleman seemed to hint at the possibility of drafting a young quarterback in the NFL Draft at one point: “You can sight a number of models where they had a veteran guy, and they drafted a young guy,” he said. “At some point, they passed the torch and away everybody went. There’s still a lot of time to make these decisions.”