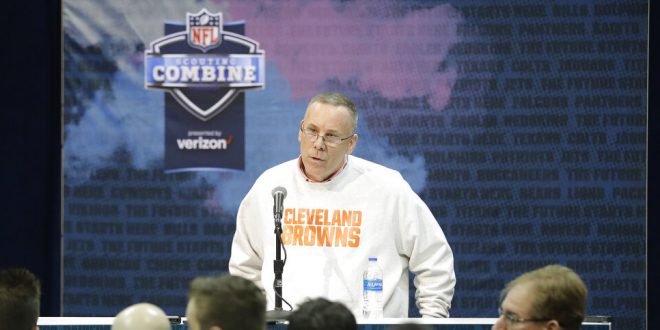 The Cleveland Browns made the controversial decision to sign Kareem Hunt last month, and now John Dorsey has further explained that decision.

Back in November, a video was released of Kareem Hunt shoving and kicking a woman in a hotel. Hunt was released from the Kansas City Chiefs almost immediately after the video surfaced. He led the NFL in rushing yards as a rookie in the 2017 season and was also a pro bowler.

This created a dilemma for NFL teams, and many speculated whether Hunt would get another opportunity to play in the league. The Browns decided to take the risk on him. John Dorsey, the general manager for the team, spent four years in Kansas City as their GM.

Dorsey stated that he and the Browns did their research on Hunt’s situation. They decided “it was the appropriate time” to sign him due to the facts. Hunt is “remorseful” and wants to earn the respect of “every single person in the Cleveland Browns organization.” Hunt’s contract is fully non-guaranteed for the upcoming NFL season. The 1.1 million dollar salary is based on how many games he plays this season as well as some other incentives.

He said that after sitting down with Hunt, he believes that Hunt has a “really good heart.”

Dorsey believes that Hunt’s level of remorse shows how badly he wants to be a better person.

He cited the facts that Hunt took full responsibility, showed true remorse, and is committed to undergoing professional help.

Hunt will try to move forward from his mistakes this summer and prepare for next season. Meanwhile, John Dorsey will be busy assembling the rest of the team’s roster for the 2019-2020 season.