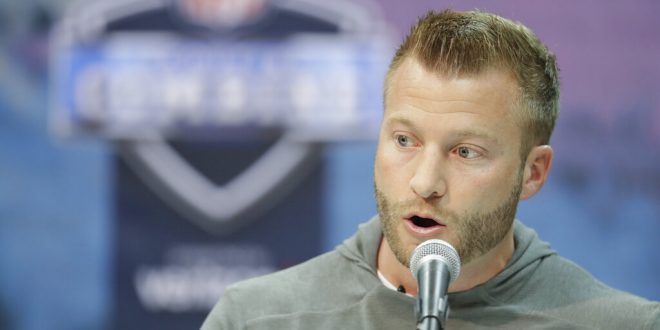 Executives, players and coaches are all gathered at the 2019 NFL Combine and Sean McVay, 33, has been vocal about his Superbowl LIII woes.

The Los Angeles Rams’ Sean McVay is the epitome of NFL modern-era head coach. McVay’s appointment and success has inspired NFL franchises to target other young and offensive-minded coaches in hopes find a version close to him. So far, there is only one Sean McVay and here are some of his accolades in his first couple of seasons in Los Angeles.

Accepting the head coaching role for the Rams on January 12, 2017, at the age of 31 was a no-brainer for McVay. Since then, the Rams have been a different phenomenon.

McVay has taken the Rams to the playoffs both years. In 2017, the team finished first in the NFC West with an 11-5 record, compared to the previous year’s 4-12 season. McVay’s men were not able to get past the Atlanta Falcons in the NFC Wild Card Game.

The Rams improved in their 2018 season, once again dominating the NFC West by tallying 13 victories. McVay’s journey was longer this time. The Rams displayed a lackluster Super Bowl performance scoring only a field-goal while the New England Patriots only had to put up 13 points to lift the trophy.

What Happened on February 3rd?

McVay opened up about his defeat in Superbowl LIII during his appearance on PFT Live on Thursday.

Todd Gurley’s late-season injury played a part in the Rams loss against that Sunday night. McVay takes some blame for not getting the best out of Gurley who was trying to make things happen.

Gurley’s left knee has raised questions over the past few months. McVay stated that there are no plans for a stem cell procedure, which is usually done to repair ACL tears. McVay went as far as to say that he’s healthy.

McVay then touched on what New England did throughout the game to stop his team from becoming Champions. McVay compares the Patriots’ performance to the Chicago Bears’ performance in December at Chicago. This was the only other game in the season where the Rams failed to score 10+ points.

Figuring out a plan to make it big in the soccer scene in the U.S. or anywhere else in the world. For now, I'm having a blast writing for ESPN Gainesville and learning a lot from managers and students around the workplace. I'm covering the TV beat for Gators Soccer. What a team! Follow me on twitter: @J_AguerrevereUF
@@J_AguerrevereUF
Previous Gator Baseball Preview: Florida prepares for three-game series against Winthrop
Next Browns GM John Dorsey Speaks About Kareem Hunt