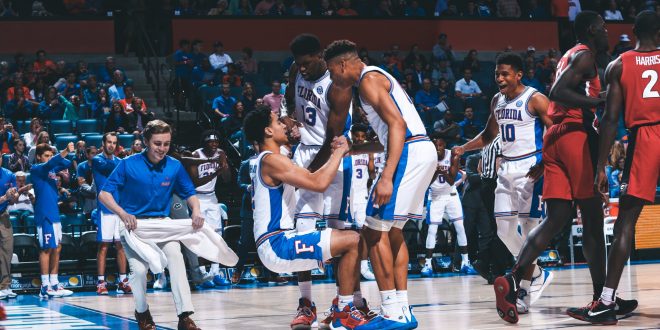 After losing each of their past three games by a single possession, the Georgia Bulldog men’s basketball team hangs on late to upset Florida in Gainesville 61-55 on Saturday night.

Jalen Hudson led the Gators with 13 points, while Kevarrius Hayes added eight points and six rebounds.  It was a particularly tough defeat for the Gators who were coming on riding a five-game winning streak and a win here would have given Florida sole possession of fourth place in the SEC that would have positioned them for a double-bye in the upcoming SEC Tournament.  Instead, Florida suffers a tough home loss that seemingly lacked effort and intensity on the part of the Gator players.

That's the final, on to the next one. #GatorsHoop pic.twitter.com/MHvEzzMGd9

Both teams had a really difficult time scoring the basketball.

The Gators shot an abysmal 18-48 (37.5%) from the field and 5-21 (23.8%) from beyond the arc. This poor shooting performance would put them at a disadvantage against any opponent. However, they were fortunate to stay competitive with the Bulldogs by forcing 15 turnovers which led to 16 points.

Georgia failed to capitalize on easy opportunities by only scoring five points off of 12 Gator turnovers. They also had no second-chance points and grabbed only two offensive rebounds, which is surprising for a team that corrals 11.8 offensive rebounds per game.

The Bulldogs lead the SEC in rebounding with 39.1 per game, but the Gators out-rebounded them 30-21. Even though Georgia struggled to grab rebounds against the smaller Gators, they still dominated the interior by scoring 34 points in the paint.

The Gators were trailing for over 28 of the 40 minutes. This allowed the Bulldogs to control the pace and tempo of the game. Gator coach Mike White’s offense thrives when they can push in transition and move the ball in the flow of the offense. When this is the case, the ball always tends to find the open shooter.

However, the Gators were trying to force too many contested looks because they felt the pressure of being down on their home floor. Shots weren’t falling so players resorted to isolation basketball, which is what has plagued their offense for a majority of the season.

White linked this loss to the lack of energy and focus in the practices that led up to the game.

KeVaughn Allen and Noah Locke, the two best shooters on the team, combined to score 12 points on 4 of 17 shooting, including 2 for 11 from three. While Jalen Hudson has elevated his level of play recently and Andrew Nembhard is an elite facilitator and floor general, the Gators can’t expect to win games with Allen and Locke shooting so poorly.

Even though the Bulldogs sit in the trenches of the SEC, they have been a lot more competitive than their record indicates. Before the victory against Florida on Saturday night, the Bulldogs had lost their last four games by a combined nine points. These losses came against LSU, Mississippi State, Ole Miss and Auburn. All four of these teams rank towards the top of the SEC and will likely be competing in the NCAA Tournament later this month. The Bulldogs have gotten extremely unlucky in numerous close games this season.

Nicolas Claxton continues to show why he is considered one of the top 20 players in the SEC.

Mike White and Jalen Hudson both credited Claxton for his monumental impact on the game.

They have also had multiple guys step up including Rayshaun Hammonds, Tyree Crump and Derek Ogbeide. The Bulldogs are a veteran team with solid talent.