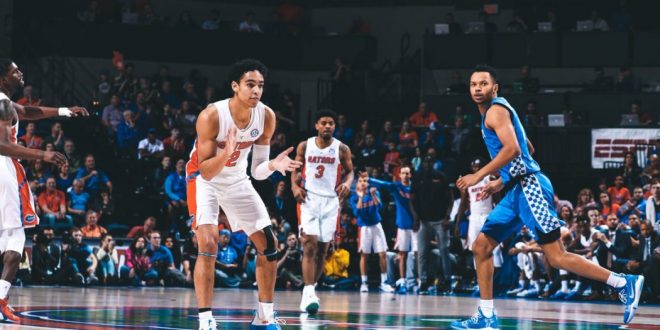 Gators Take on No. 6 Kentucky in Regular Season Finale

The Florida Gators will conclude their regular season on Saturday afternoon as they head to Lexington to face off against the 6th ranked Kentucky Wildcats. The Wildcats have won 5 of their past 6 games and sit at 14-3 in the SEC.

In their first meeting in Gainesville at the beginning of February, the Wildcats took control late to seize a 65-54 victory. Florida led for a majority of the game but couldn’t close out when it mattered most. The Gators were up by 11 points with a little under 14 minutes left to play, but the Wildcats ended the game on a 34-12 run to secure the victory.

There are only 5 teams in the country that rank in the top 12 in offensive and defensive efficiency. All five of these teams (Kentucky, Virginia, Duke, North Carolina and Michigan State) rank in the top 10 in the current national rankings.

However, the Gators are fortunate that they will likely avoid going up against Reid Travis, who is sidelined with a knee injury. The senior is a dominant interior presence and is a key member of the team. He is averaging 11.3 points and 6.9 rebounds per game.

Without Travis, the Wildcats will not be able to dominate the interior like they typically do.

Even though the Gators have lost two straight games, they are undoubtedly playing their best basketball of the season.

Jalen Hudson had his best performance of the season in their most recent loss against No. 10 LSU. The senior guard put up a season high 33 points and has now produced double digit scoring in five straight games.

KeVaughn Allen continues to be in a major scoring slump. In the past 3 games, he has scored 15 points on 4-25 shooting, including 2-13 from beyond the arc.

If the Gators want to stay competitive with the Wildcats in an extremely hostile environment, they need Allen and Hudson to be at their best.