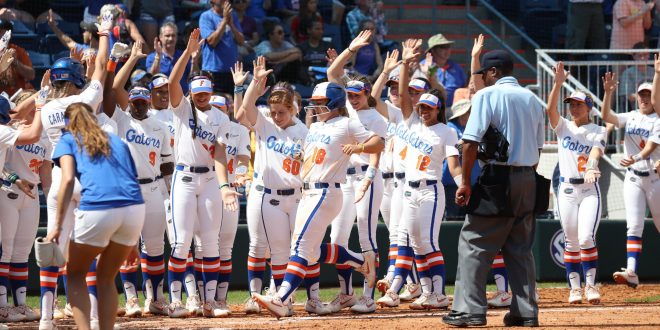 The No.4 Florida Gators softball team defeated No. 7 Tennessee, 8-0 in six innings, in the final game of the SEC Opening Weekend’s series with the Lady Vols.

The Gators (22-4, 1-2 SEC) defeated the Vols (18-3, 2-1 SEC) thanks to two home runs from senior Amanda Lorenz and a dominant performance from Kelly Barnhill on the mound.

The reigning SEC Player of the Year ripped a pair of line-drive homers and knocked in five runs, as the Gators got revenge for being run-ruled Friday night with a run-rule of their own.

Offensively, the Gators scored eight runs with 10 hits as Florida had a two-run home run from Kendyl Lindaman (1-for-3) in the third inning.

B3 | That ball is GONE‼️ @Kendyl_23 UNLEASHES on the 3-1 pitch from Arnold and puts the #Gators ahead 2-0 with a HR to left field. @AmandaLorenz18 drew a walk to start the inning. pic.twitter.com/iddokn9CK9

Likewise, Caraway and Voss helped the offense as they were able to turn the lineup over and hand things off to Lorenz and Lindaman.

However, Tennessee struggled to get in an offensive rhythm while facing the senior pitcher in the series finale.

In addition, in the circle, Barnhill (13-2) struck out 13 batters while only giving up two hits and a walk, and no runs over 6.0 innings pitched.

After that, her first four innings she struck out 12 of her first 13 batters faced allowing just one walk in the first inning.

“I think I was really just hitting the spots and moving my ball around better,” Barnhill said. “I think we definitely got more strikeouts today on placing the pitches, working around the zone.”

Subsequently, after the game, Lorenz spoke on the importance of winning the series finale.

“Especially in this league, no game is easy in the SEC. But especially to go out and show that we have some fight. It was awesome,” she said.

The Gators improved to 51-28 over Tennessee with a 26-7 record over the Lady Vols at home. However, Sunday’s shutout was the third shutout of a Top 25 opponent this season by the Gators.

Similarly, this is also the first time the Gators have run-ruled a Top 25 opponent and it’s the first time since May 31, against No. 7 Georgia at the Women’s College World Series.

The No.4 Gators host UCF on Wednesday at 6 p.m. at Katie Seashole Pressly Stadium.