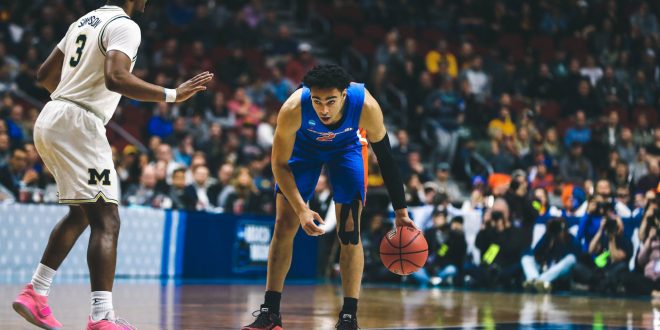 The Florida men’s basketball team saw its season come to an end in the NCAA Tournament’s second round with a 64-49 loss to the Michigan Wolverines.

Michigan’s Jordan Poole led all scorers with 19 points, including 4 of 9 from beyond the arc.

One year to the day after he became a March Madness legend with a buzzer beater against Houston, Jordan Poole wills Michigan to the Sweet 16 over Florida.

Business as usual in Ann Arbor.

Back to Southern California.

The Gators were in the game at halftime,  only trailing by four points, but the Wolverines went on a 8-0 run in the first 1:41 of the second half to extend their lead to 12. This lead stayed pretty consistent throughout the second half en route to a 15-point victory.

Florida really struggled to shoot the ball after the intermission, going just 8 of 28 (28.6%) from the field and 3 of 14 (21.4%) from beyond the arc. These shooting struggles contributed to the Gators only scoring 21 points in the second half.

Andrew Nembhard turned the ball over on two straight possessions when the Gators were down by seven points with under seven minutes left to play. Converting on these two possessions could have easily put the Gators back in the game, but the Wolverines capitalized by extending the lead to nine. Even though the Gators were still within striking distance at this point, they weren’t able to make any type of run after this.

Overall, the Gators didn’t give themselves much of a chance to win this game by only scoring 49 points. They shot 19 of 55 (34.5%) from the field and struggled to create easy opportunities. Much of these offensive struggles can be credited to Michigan’s elite defense.

The Wolverines were able to use their size to their advantage. The Gators had no answers for pick and rolls between Zavier Simpson and Jon Teske. Even though Teske only had eight points and 10 rebounds, he was able to create mismatches for his teammates which led to easy opportunities.

Michigan out-rebounded the Gators 31-24, including grabbing 11 offensive rebounds as well.

Teske, who was the leading shot-blocker in the Big Ten, didn’t have a block in the game. However, he consistently deterred the Gators from attacking the basket because of his size and defensive abilities.

Jalen Hudson discussed how Tekse’s presence is a huge difference maker for the Wolverines.

“They had the 7-footer and even when you did get in the paint it was tough and he was blocking them,” he said.

This loss concludes the successful careers of KeVaughn Allen, Kevarrius Hayes and Jalen Hudson. Allen and Hayes have been an integral part of the program for the past four years, while Hudson provided an impactful two years. All three seniors were in the top four in scoring on the team this season.

All three freshmen, Andrew Nembhard, Noah Locke and Keyontae Johnson, gained extremely valuable experience this year. These three, along with a highly ranked recruiting class, will spearhead a young Gator team moving forward. The return of Keith Stone and the development of Isaiah Stokes provide a bright future in Gainesville.