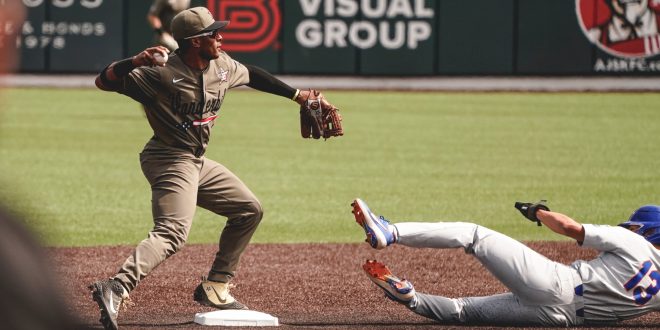 Gator Baseball Gets Swept at Vanderbilt

The Gator baseball team is now 16-10 on the season and just 1-5 in SEC play after being swept in a three game series at Vanderbilt; Florida lost the final game Saturday 14-4.  It’s the first time since 2007 that Florida has been swept by Vanderbilt.  The Commodores outscored the Gators 34-6 in the series.

Florida actually took a 2-0 lead in the third inning Saturday after a solo home run from Brady Smith and a wild pitch that scored Jacob Young, who had singled earlier in the inning.

Is this a no-doubter? #BradyBomb

Vanderbilt’s Offense Too Much For Gators

After retiring the first nine batters, Florida starting pitcher Tyler Dyson (3-1) found himself in trouble in the fourth.

Vanderbilt’s Cooper Davis started the rally with a bunt single and after a single and a walk, Stephen Scott stole the momentum from the Gators with a grand slam to give the ‘Dores a 4-2 lead.

IT HIT THE POLE! GRAND SLAM!

In the sixth inning, after a hit batter and a walk, Philip Clarke would deliver a three-run homer into right center that would end Dyson’s day on the mound.

Dyson's day is done in the sixth as Jordan Butler will take over.

Gator coach Kevin O’Sullivan said Dyson’s outing was not as bad as the score might indicate.

“The one takeaway from today, Tyler did throw the ball better, he got on top of the ball better,” O’Sullivan said. “That’s certainly something to build upon moving forward.”

Vandy would continue to add to its lead, scoring two runs in the seventh inning and four more in the eighth off Gator relievers.  Florida did manage to score two runs in the ninth inning on a wild pitch and an RBI hit from Jud Fabian but it wasn’t enough to overcome the offense of Vanderbilt that hit 351 in the series while Florida managed to hit just .174 in the three games.

In short, Florida will look to regroup as they face in-state rival Florida State on Tuesday in Jacksonville in the second Fresh from Florida Sunshine Showdown of the season.

First pitch is scheduled for 6 p.m. The game will be aired on the Gators Sports Network and SEC Network+.