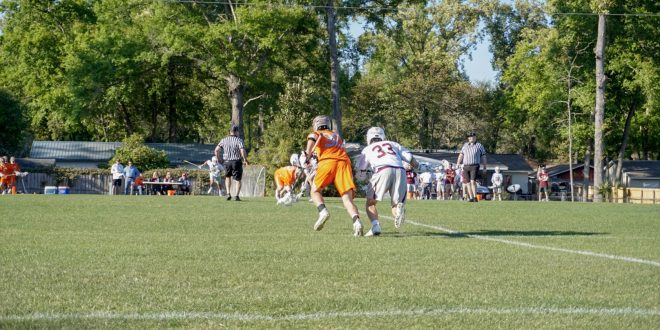 In a matchup between top-ranked teams in the state of Florida, the Oak Hall Eagles defeated the Winter Park Wildcats 10-5.

Jack Limon of Oak Hall played a pivotal role in creating turnovers and clearing the ball to create offensive possessions. Some of his groundball work turned into fast-break opportunities for the Eagles, which played a role in them pulling away late in the game.

It was apparent early in the game that this game would not be the usual blowout that the Eagles have become accustomed to. The Wildcats defeated Bishop Moore, one of the top teams in the state, earlier this season; and Oak Hall knew this coming into the game.

“Winter Park has a lot of talent. Their face-off man is excellent. They’re very well coached. They have very good atheletes and they just got after it.” – Oak Hall Coach Montes

The teams nearly mirrored each other’s play early in the game, with the shot differential never surpassing +2 on either side in the first half. What really turned the tide of the game was the play of Oak Hall #20 Shayne Ryan. Ryan made 8 saves in the game, stopping what seemed like every shot that landed on goal.

Ryan’s saves combined with good execution for the Eagles on offense helped bring them to a 5-2 lead at halftime.

Still close here, @OakHallLacrosse leads @WPHS_OCPS lacrosse 5-2 at the end of the half. Oak Hall No. 18 Ben Moraski topped off the half with a late score. @ESPNGainesville. pic.twitter.com/4CbnE6dEZ0

Winter Park came out in the second half firing on all cylinders, scoring two goals in the first minute of the third quarter to close the gap. Oak Hall would respond with two goals to end the quarter, as things took a turn near the end of the third.

Frustration with officiating and the course of the game mounted for the Wildcats at the end of the third quarter. They would commit two penalties to end the quarter two-men-down.

Emotions are running high for @WPHS_OCPS as they still trail @OakHallLacrosse 7-4 at the end of the third. Winter Park will enter the fourth quarter with two men in the penalty box. @ESPNGainesville. pic.twitter.com/2yQbAW3hCB

These penalties ultimately subdued the Wildcat comeback hopes. Winter Park committed a total of nine penalties in the game, six of which occurred in the fourth quarter.

Oak Hall capitalized off of their man-up opportunities, scoring the three goals in the fourth quarter to seal the deal. Coach Montes commented on how his team kept their composure as the game heated up:

“Senior leadership, simple as that. You’ve got guys out here who understand what it is to wear an Oak Hall uniform.” – Coach Montes

Montes cited seniors Kyle Cox and Ryan O’Leary as the leaders to keep their team grounded during the onslaught of penalties committed against them.