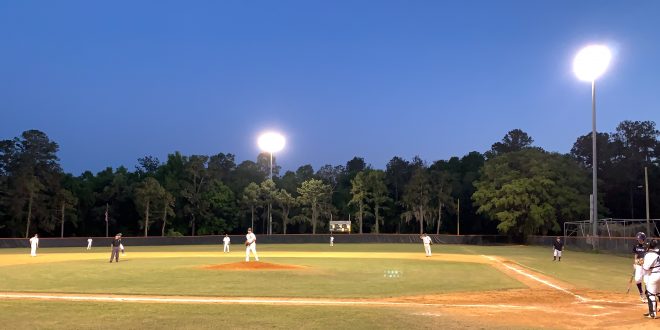 Game Night: The Eastside Rams defeat the Gainesville Hurricanes 11-7 at home for the first time in five years.

The Eastside Rams baseball team defeated the Gainesville Hurricanes this past Friday in comeback fashion, winning 11-7.

A few mistakes from the Rams early in the game ended up costing them three runs in the first inning. In the second inning, the Rams were only able to score one run and the game stood at 3-1.

“They hung in there. We gave up a couple of early runs,” said Rams coach Sean Dobbs. “They were resilient and kept fighting and we were able to break through.”

The third inning came with a surplus of energy from the Rams that caused them to score nine runs while the Hurricanes remained scoreless. The Rams led 10-3.

“We just kept the base runners moving and kept the pressure on them and we were able to get a few across the plate,” Dobbs said.

From there on out, some sporadic scoring from both sides brought the game to an end.

Right-handed pitcher Joe Ukeiley closed out the game for the Rams and he said he felt he could get the job done.

This is the first time in at least five years that Eastside High School was able to beat Gainesville high school in varsity baseball.

“That was the first time we beat GHS since I’ve been here, so at least five years,” Dobbs said. “The guys came out today and they were a little hungry and they wanted it, so we were able to get enough runs out there to complete it.”

This last encounter leaves the Eastside Rams with a 2-5 overall record.

“We definitely need to clean up defensively and we made a few errors on the field,” Dobbs said. “We should get the bats talking a little bit and we’ll be good to go.”

Eastside’s next game is at home versus North Marion High School on Tuesday at 7 p.m.