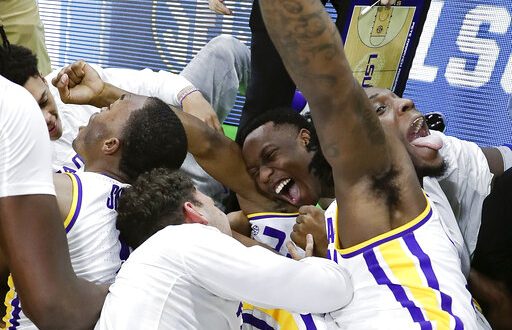 It has been 13 years since the LSU Tigers have played in a Sweet 16 game. But this year, this Tigers team led LSU back to the Sweet 16 after a 2-point victory against Maryland on Saturday. Tremont Waters led his team, as he has all season, to defeat the Terrapins in the final seconds of play.

The Tigers dominated the Terrapins in the first half. LSU led by as many as 15 points and saw the floor extremely well through Maryland’s defense. However, the Terrapins followed as Aaron Wiggins led the team on offense with back-to-back threes near the end of the first half. Maryland headed into their locker room only down by nine to the Tigers at the half.

But as it has shown throughout all of the NCAA Tournament, it can be anyone’s game in the second half.

The Terrapins worked to close the Tigers’ gap and finally got the game within 5 points with just over 10 minutes left to play.

Finally, the game was tied up with 6:30 left to play and the energy on Maryland’s side. From there it was a back-and-forth battle with both teams working to get to the rim.

Jalen Smith for the Terrapins knocked down a three with 25 seconds left to play. Tie ball game.

From there, LSU had the control and the power for a last-second shot to seal the game. With seven seconds left to play, the Tigers wanted the ball in their sophomore ball handler Tremont Waters’ hand. The play was drawn up and executed. Waters got past two LSU defenders and laid it up off the backboard to put the Tigers up by 2 with 1.6 seconds left to play and no timeouts left for the Terrapins.

This was enough to hold off the late-game comeback that the Terrapins had hoped to pull out.

Adversity with the Tigers

This season has been one that had the potential for the Tigers fall apart at any moment. But it seems that the adversity that this team has gone through has brought the players and coaching staff closer together and ultimately winning them games at this late point of the season.

LSU lost one of their teammates in September after he was killed. On top of this loss, the Tigers head coach Will Wade was suspended indefinitely for cheating allegations at the beginning of March.

Amidst all of the obstacles, this team has had interim head coach Tony Benford, who says that he is proud of this teams’ comradery.

LSU improved to 22-1 when leading at the half with their only loss handed to them from the Florida Gators in the quarterfinals of the SEC Tournament just a week prior.

The Tigers will be taking on the No. 2 seeded Michigan State Spartans in D.C., on Friday. LSU will look to make their first Elite Eight appearance since 2006.