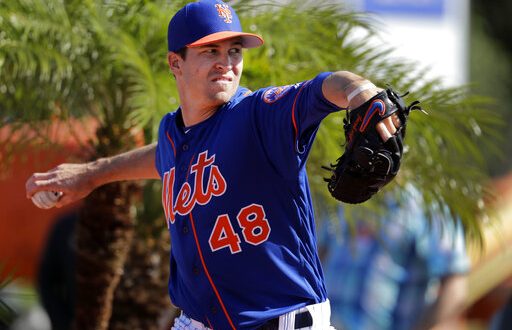 The 30-year-old reigning Cy Young winner was supposed to make $17 million this season. He also was under team control until 2020. This extension replaces the current deal and includes an opt-out after 2022, as well as a club option for 2024. The deal has a full no-trade clause.

To many baseball fans, deGrom is arguably one of the best pitchers in the MLB right now. He led the majors with a 1.70 ERA in 217 innings last season, the fifth-lowest ERA by a pitcher in a single season since the mound was lowered in 1969. Although he went 10-9, he had 269 strikeouts in 32 starts.

But he had little support around him, and the Mets finished the year at 77-85. He still was the runaway winner in the NL Cy Young Award – the pitcher with the fewest wins to ever receive the honor.

So Brodie Van Wagenen, the newest general manager for the Mets, had plenty of incentive to make sure this deal happened. He says he felt little pressure in making sure the agreement went through.

Now that the Mets officially locked in deGrom, he’ll re-join with pitcher Noah Syndergaard. He posted an ERA of 3.03 in 2018 and had just four losses on the season. He took to Twitter to share his excitement about deGrom’s extension.

The Mets open up the season against the Washington Nationals on Thursday. deGrom will take to the mound and face Cy Young Award runner-up Max Scherzer.