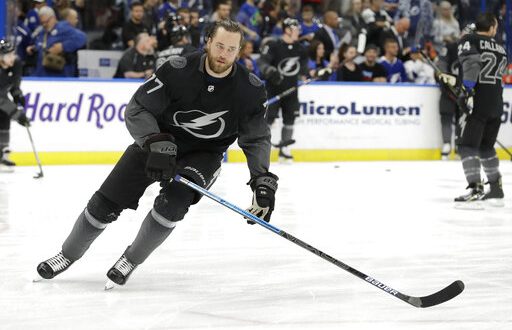 A 5-2 winning final score is pretty typical for the Lightning. However, the Senators wouldn’t allow the Lightning to take it away so easily.

The winningest team in the National Hockey League had some hurdles to overcome before extending the win column once again, becoming the third team in NHL history to stamp 60 games on a season.

The Lightning committed a few costly mistakes that nearly kept them at a standstill until the second period. An early Yanni Gourde score, while crucial, wouldn’t scare off the Senators so early.

The first period concluded with a tie, with the Lightning offense slowly coming together throughout. A Tyler Johnson penalty was a dip in momentum for the Lightning that the Senators failed to exploit. Even so, the Senators maintained their focus and found a groove.

With a minute remaining, the Senators’ Brady Tkachuck set the offense in motion and tied the game to end the first period.

The second period told an entirely different story. The Lightning would ultimately push past the Senators to establish the lead for the night. The Lightning regained their confidence where the Senators quickly fell off, paving the way for what would become mostly inconsistency for the evening.

Another Yanni Gourde goal plus contributions from Mikhail Sergachev, Brayden Point and Steven Stamkos would take Tampa to the top. The Senators managed an additional goal from Max Verroneau but crumbled by comparison as they failed to put anything else up on the board.

In fact, 22 Andrei Vasilevskiy saves made sure of it, allowing the Lightning to finish the game with a historic milestone.

The Lightning plays their second game in a three-game road trip tonight, with a stop in Montreal at 7:30 p.m.