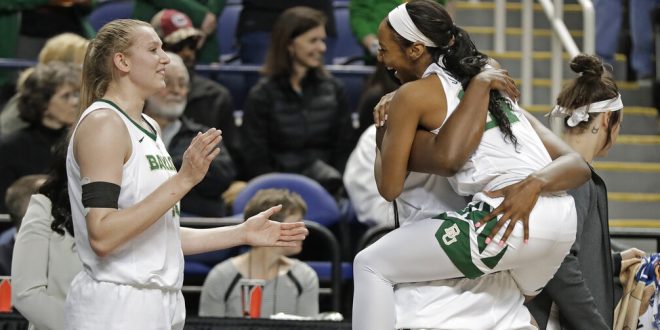 Baylor's Chloe Jackson, right, jumped into the arms of Kalani Brown as Lauren Cox, left, looks on as they celebrate their win over Iowa in the closing moments of the second half of a regional final women's college basketball game in the NCAA Tournament in Greensboro, N.C., Monday, April 1, 2019. (AP Photo/Chuck Burton)

Baylor and Oregon have met three times, including the NCAA Second Round match-up in 2005, where Baylor went on to claim their first National Championship.

This will be Oregon’s first Final Four in school history. They will head into the game with an overall record of 33-4, with just two conference losses.

The Ducks defeated No. 1 Mississippi State for the second time this season to advance to the Final Four, handing the Bulldogs two of their three losses this season. The Ducks performance on Sunday was highlighted by Sabrina Ionescu with 31 points and eight assists.

For Baylor, this will be their first time in the final four since winning the title in 2012. They will be coming in with a record of 35-1. After winning against Iowa, the Lady Bears have now won four straight tournament games by at least 25 points.

Only two other teams have been able to accomplish this accolade. Both teams were UConn between 2010 and 2013. They eventually went on to win the national title.

This game will be a rematch of last years national semifinal, where Notre Dame upset UConn with Ogunbowale’s buzzer-beating shot. These two teams are no strangers to the Final Four.

UConn has made the finals 20 times overall compared to Notre Dame’s ninth trip. This game will make the two teams 50th overall meeting and eighth in the Final Four.

UConn was able to hold off No. 1 Louisville on Sunday to advance to their 12th straight Final Four. The Huskies will come into this match-up 35-2. They will try to reach the finals after being eliminated for the past three years in the semifinals. Their past two losses in the semifinals were off last-second shots. The Huskies performance on Sunday was highlighted by Katie Lou Samuelson who had 29 points.

Notre Dame started off their Elite Eight game on a rough note. Entering the second half, the Fighting Irish trailed by seven. Notre Dame shook off this slow start easily though and defeated Stanford 84-68.

The Irish enter the Final Four with a record of 34-3 this season. The elite eight games also made history for Notre Dame as their starting five of Arike Ogunbowale, Jessica Shepard, Brianna Turner, Marina Mabrey, and Jackie Young became the first group in NCAA history to score 10,000 points.

The Florida Gators women’s basketball team has had a pretty successful start to the season. …