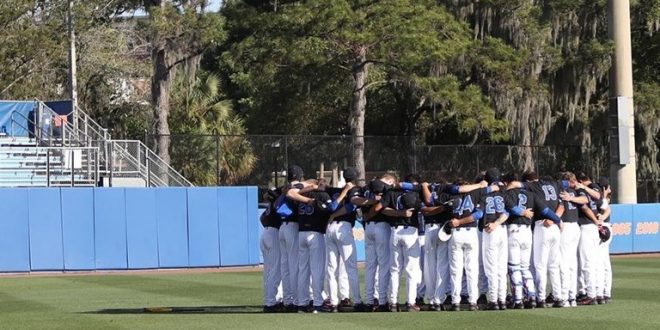 To begin with, Florida is currently on a program-best 10-game winning streak over FSU dating back to 2016. In the past 10 games, the Gators have shut out the Seminoles four times and outscored them 70-26.

In the first game against the Noles this season on March 12, Florida State jumped out to a 6-0 lead, but the Gators would outscore FSU 20-1 over the final four innings as Kendrick Calilao had a grand slam and six RBI.

In Jacksonville on March 26, Florida would defeat FSU 4-2. The Gators scored first on a RBI double from Austin Langworthy in the fifth inning. But, FSU would answer with a two-run homer in the sixth.  Brady McConnell’s two-run double in the seventh inning would give Florida the lead as Christian Scott pitched 3.1 scoreless innings to close the game.

After a 1-3 week, Florida dropped out of the USA Today Coaches Poll. Florida had been ranked in 76 straight polls, making it the longest active streak in the country. The last time the Gators were not ranked was March 24, 2014.

Over the weekend, the Gators were swept by No.18 Ole Miss in Oxford. On the mound, the Gators had their worst weekend of the year, posting an 11.62 earned run average, allowed 40 runs and a .415 batting average to the Rebels.

The Gators have yet to announce who will get the start on the mound but Florida pitchers are 1-7 on the road with a 9.55 ERA.

Florida State is coming off a win in the final game of a series with Miami.  FSU’s starting center fielder J.C. Flowers delivered his sixth home run and earning his sixth save on the mound in the win.

Sophomore righty Conor Grady (5-3, 3.60 ERA) will take the mound for the Noles. Grady, who threw 56 pitches in the March 12 game against Florida, went three innings, allowing three hits with three strikeouts before being replaced.

You can catch the match up on the ACC Network Extra being streamed on the WatchESPN app or listen on 103-7 The Gator starting at 5:55 p.m.