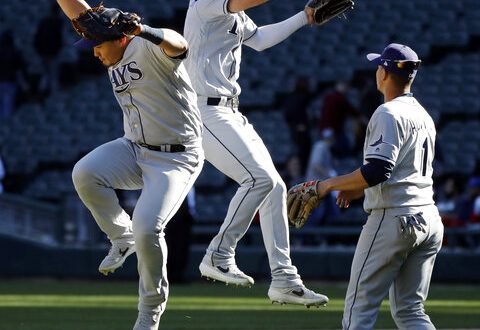 The Tampa Bay Rays are sitting atop the AL East with an overall record of 8-3. The Rays are 3-0 in series so far and a win over the Chicago White Sox today will give them number four.

Yesterday, Tampa Bay left as winners, topping the White Sox 5-1. The Rays jumped out to a first inning lead, juicing the bases in the team’s first three at-bats. Then, Guillermo Heredia walked allowing Yandy Diaz to score. Ji-man Choi quickly followed that up with a sacrifice fly and the Rays went up 2-0. Defensively, pitcher Blake Snell was arguably better than the offense. He struck out the first two batters and ended the first inning with just 14 pitches thrown.

In the second, the Rays got two more runs as Willy Adames scored off a Daniel Robertson bunt. Avisail Garcia then doubled to bring Tommy Pham home.

It was pretty quiet until the fifth inning when Snell gave up a homer to Chicago’s Jose Rondon. But Snell would once again have a good day on the mound as the reigning Cy Young Award winner shut down the White Sox.  In the end, 5-1 was the final score.

The White Sox are struggling so far with no series wins and an overall record of 3-6. While hitting is not quite where it needs to be, most of Chicago’s issues are manifesting on the mound. Yesterday, Carlos Rodon threw 62 strikes on 111 pitches before getting relieved by Carson Fulmer. Fulmer, who was called up to the majors just before the game. Shortly after the loss, the former Vanderbilt stand out was sent back down to the minor leagues.

Today, the Sox will roll out Ervin Santana to the mound, who went 0-1 in games last season and held an 8.03 ERA in his five starts. On the other side, Tampa Bay will give Charlie Morton the start. Morton has a 1-0 record with a 1.64 ERA.