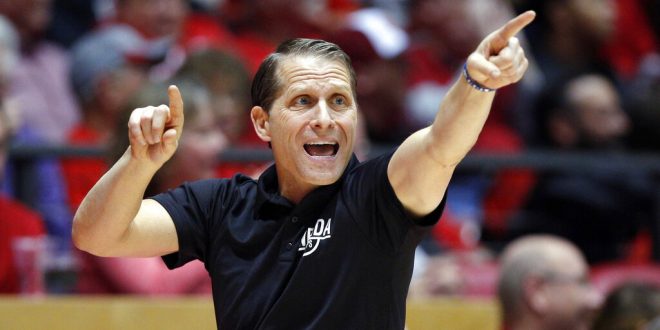 Over the weekend, the Arkansas Razorbacks finalized a deal with Nevada’s Eric Musselman to become their next basketball head coach.

His Time at Nevada

Arkansas gets a big hire for its program as they land one of the top coaches outside of the power conferences. Musselman spent the last four seasons as head coach of the Wolfpack reaching the NCAA Tournament each of the last three seasons.

These past four years at University of Nevada have been unforgettable. Thank you Northern Nevada and Wolf Pack nation!

Musselman got as far as the Sweet 16 and is most known for coaching up a Super Senior class lead by NBA prospects Caleb and Cody Martin. He went 110-34 in his four years and recorded three consecutive single-digit loss seasons.

Musselman will have his hands full as he makes his move to the SEC. He takes over an Arkansas team that finished ninth in the conference and made an early NIT exit. Former coach Mike Anderson led the Razorbacks to three NCAA Tournament appearances in the last five seasons.

Arkansas will be losing leading scorer and rebounder Daniel Gafford as he declares for the NBA Draft. It will be tough for Musselman to replace him, but his ability to recruit and bring out the most of his players is well documented.

And I can promise you that I will help you become the best player that you can become. pic.twitter.com/iuFkuuhYOl

Coming to the SEC

The SEC had a strong year getting seven teams into the tournament. In addition, there were three teams consistently at the top of the rankings. Tennessee, LSU and Kentucky were all on national radar throughout the season. Let’s not forget, Auburn’s historic run to the Final Four.

It will be important to keep an eye on other first-year SEC coaches. Former NBA All-Star Jerry Stackhouse will take over a Vanderbilt program that went winless in conference play this season, Buzz Williams was hired by Texas A&M, Alabama lands rising star and former Buffalo coach Nate Oats and Musselman lands in Arkansas.

Big hire for Arkansas adding Eric Musselman. I think the SEC now has the best basketball coaches in the nation.

With many top recruits heading to SEC schools not named Kentucky, the conference can be even more competitive. Another point of emphasis is the high level of head coaching the SEC now has.

Auburn’s Bruce Pearl just took his team to the Final Four, Tom Crean’s Georgia and Mike White’s Florida should take a step forward next year. Rick Barnes was also just named the Naismith Coach of the Year for the Volunteers.

The SEC had seven of its 14 teams play in the NCAA Tournament this season and just added Buzz Williams, Eric Musselman, and Nate Oats as head coaches. Big Boy Basketball.

With the National Championship set for tonight, it’s good to see the SEC getting an early start to next season as they look to have an even stronger year as a conference.

What does Scooby-Doo, a wooden chair and Bruce Jenner all have in common? Their names …