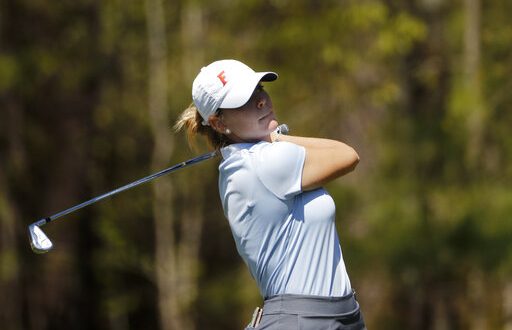 Marta Perez, of Spain, tees off the 11th hole during the first round of the Augusta National Women's Amateur golf tournament at Champions Retreat in Evans, Ga., Wednesday, April 3, 2019. (AP Photo/David Goldman)

Florida women’s golf returns to the postseason, this time in search of a winning formula.

Two years removed of their last SEC championship title, Florida heads into this year’s edition with a will to win. They took an early exit in 2018 after losing to defending champion Arkansas in match play quarterfinals.

After falling outside of the top-10 ranked teams in the nation, can the 12th ranked Gators bounce back to where they began?

The regular season didn’t conclude in the fashion the Gators had quite hoped for. Fifth and sixth place tournament finishes followed after a dominating win at home. Fifth came courtesy of the Evans Derby Experience, where freshman Clara Manzalini tied her career-best individual finish as she tied for third place in the tournament with one over par score.

Sixth place was found in the season finale at the Liz Murphy Collegiate, in which Sierra Brooks and Marta Perez sat out due to their trip to the inaugural Augusta National Women’s Amateur. Liz Murphy Collegiate, a match play tournament, was merely a warm up for the postseason. A shift in the starting lineup gave freshman Jenny Kim, junior Carlota Ricolfi and sophomore Lauren Waidner some tournament action on the road.

Perhaps having the veteran leadership return in Brooks and Perez will help steer the team towards another SEC title. Perez was a member of the last SEC title team as a freshman in 2017.

Vanderbilt reigns atop the SEC in national rankings, capping off its regular season with a title at the Clemson Invitational. A 21-under team finish toppled the field with an eight-stroke cushion.

Arkansas follows closely behind Vanderbilt with some heat of its own. Senior Maria Fassi came up just short of the Augusta National Women’s Amateur title behind champion Jennifer Kupcho. Besides the historic run, the reigning SEC Player of the Year has delivered quality play in the Razorbacks’ regular season campaign.

The action begins at Greystone Golf Club in Birmingham, Alabama on Wednesday, April 17, at 9 a.m. 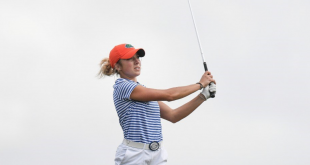