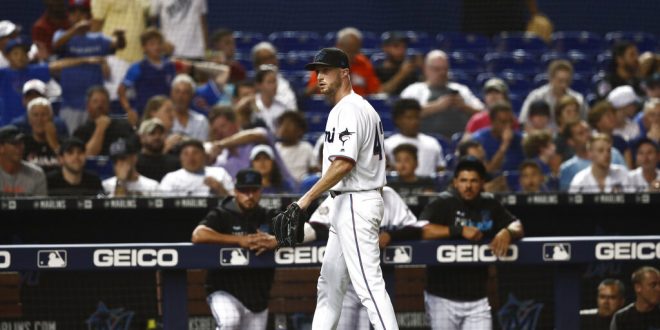 The temperature might be heating up in Miami, but the same can’t be said for the Marlins. They are now 4-15 after a shutout loss against the Chicago Cubs in Marlins Park Wednesday night. That’s one game worse than their start to the 2018 season.

What Happened on Wednesday

The Marlins were swept and shutout for the second straight game and for the fifth time this season. Cole Hamels cruised through seven innings allowing three hits and no walks while striking out eight batters.

The Marlins have the fourth-most strikeouts at the plate as a team with a total of 179. That mark divided by their total plate appearances gives a strikeout rate of 26 percent.

The Cubs got to Marlins starter Sandy Alcantara early thanks to a Daniel Descalso single that scored catcher Wilson Contreras in the top of the second. Chicago added four more runs to essentially put the game out of reach in the third.

They came on a pair of singles by Javier Baez and Jason Heyward along with a two-run double by Descalso.

Baez capped it off with a monster home run in the top of the 8th inning. Alcantara finished the day with five earned runs allowed on seven hits through six innings with seven punchouts to just one walk.

The Marlins have Thursday off but start the first of three-game series with the Washington Nationals on Friday at 7:10 p.m. This will conclude the team’s stint of nine-straight home games.

Washington (8-8) is one spot up on the fifth-place Marlins. The Nats enter are winners of five of their last 10 games coming into their series finale against the Giants on Thursday.

Anibal Sanchez is projected to face his former team on Friday. He is 0-1 with a 4.86 earned run average and 11 strikeouts in his three starts this season. The Marlins will counter with Caleb Smith. His 2.65 ERA is the lowest among Marlins starters this season and tied for second with 21 strikeouts.

Previous Tampa Bay Rays continue to be one of the hottest teams in baseball
Next PREVIEW: Men’s tennis team hosts SEC Tournament