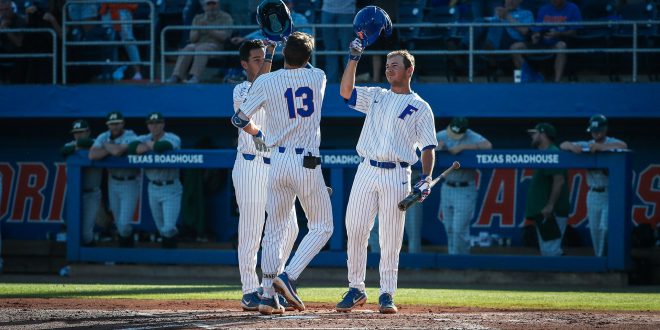 After taking an important series over South Carolina, the Florida Gators (26-14, 7-9 in SEC) are continuing their success. Florida’s offense led the Gators to a 16-9 victory over the No. 14 LSU Tigers on Thursday night in Baton Rouge.

Tommy Mace had a solid performance on the mound for Florida. Mace pitched four scoreless innings and finished the night with a final stat line of (7.0 IP, 10H, 4R, 4ER, 2BB, 9 K).

Florida’s bullpen struggled in the final two innings against the Tigers. Hunter Ruth had a short outing in the top of the eighth, allowing three hits and two runs.

LSU’s starting pitcher Ma’Khail Hilliard pitched a solid first inning before struggling in the second. Hilliard allowed seven hits and six runs in the top of the second.

The Tigers put five pitchers on the mound combing for 20 hits, 16 runs, and 16 errors.

Game 1 proved to be a slugfest for both teams, Florida and LSU combined for a total 36 hits. Florida had their best offensive performance in SEC play, with eight of nine starters recording at least one hit.

After a quiet first inning, the Gators jumped out to a 6-0 lead in the top of the second.

It started with a sac-fly from Jud Fabian that allowed Cory Acton to advance home for Florida’s first run of the night. A two-run RBI double from Brady Smith, followed by an RBI single from Austin Langworthy would put the Gators up by four.

Kendrick Calilao’s two-RBI single would further the Gators lead to 6-0.

Florida continued to tack on runs throughout the night, while LSU remained scoreless until the bottom the fifth.

In the top of the third, an RBI single from Smith advanced Wil Dalton home, putting Florida up 7-0. Acton’s three-run homer, the first of his career, in the bottom of the fourth would give the Gators a 10-0 lead.

Florida’s Brady McConnell came out swinging in the top of the fifth, scoring a three-run homer. LSU responded with a two-run RBI single from Cade Beloso, cutting Florida’s lead, 13-2.

The Tigers had a late rally in the last three innings, scoring a combined seven runs. In the bottom of the seventh, Beloso struck again with an RBI single and brought the score to 14-4.

In the eighth, Florida and LSU exchanged a pair of home runs from Smith and Saul Garza. Smith finished the night three for four at the plate with four RBI.

A two-run RBI triple from LSU’s Brandt Broussard would bring the final score to 16-9.

Furthermore, Jack Leftwich will get the start on the mound for Florida in Game 2. Leftwich is 4-2 on the season with a 4.50 ERA.

You can catch live coverage of Friday’s match-up beginning at 8 p.m. on the SECNetwork or listen live at 98.1 FM/850 AM WRUF.