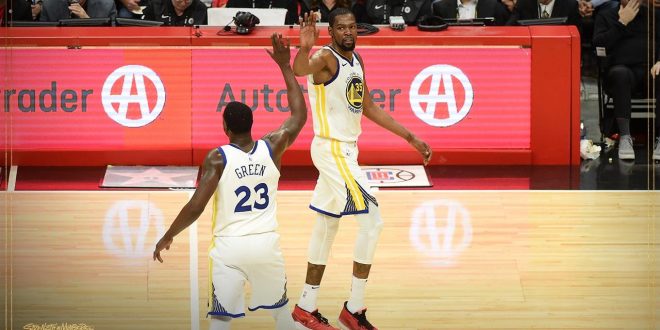 With a Game 3 victory, the Golden State Warriors are looking to take control of their series with the Los Angeles Clippers.

After blowing a 31 point lead in Game 2 of the series, all eyes were on the Golden State Warriors and Kevin Durant. Durant’s Game 2 saw him record nine turnovers and six personal fouls. The two-time Finals MVP took just eight shot attempts the whole game, and many have credited Clippers’ guard Patrick Beverley for his defense on Durant. The combination of Durant’s struggles as well as the huge blow lead led to a lot of criticism for Golden State.

In Game 3, the Warriors came out swinging. They poured in 41 points in the first quarter and took a very early double-digit lead that would never be relinquished. Clippers’ coach Doc Rivers said that the Warriors “threw a punch” and that his team “didn’t respond very well to it.”

The Warriors outscored the Clippers in all of the first three quarters. The team was locked in from the start, and they got very solid performances from almost everyone in the rotation. Stephen Curry had 21 points on 7-11 shooting.

Klay Thompson added 12 points and went 2-2 from beyond the arc. Andrew Bogut and Draymond Green combined for 16 points, 20 rebounds and 15 assists. Andre Iguodala put up 15 points on just 6 shots off the bench.

However, the star of the show was Kevin Durant. KD was on fire from the start. He poured in 27 points in just the first half. After an 11 point third quarter, Durant exited the third frame with 38 points on 14-23 shooting to go with 7 assists and 4 rebounds. With the game already out of reach, he didn’t play the fourth quarter. Durant explained his hot start after the game:

The Warriors seem to be in control of the series after their dominant Game 3 performance. Game 4 will be huge in determining the outcome of the series. If Golden State can take Game 4 on the road, the series will likely be over. However, the Clippers can regain momentum and tie the series at two games apiece. For the Warriors, they aren’t overlooking their opponents. Steph Curry said that his team “still has work to do.”