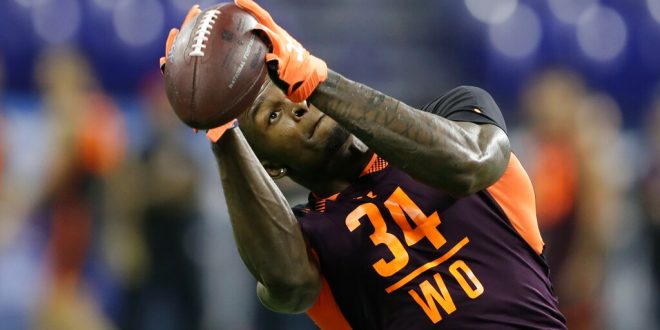 The first round of the 2019 NFL Draft starts Thursday, April 24th at 8 p.m in Nashville, Tennessee.

And Ole Miss wide receiver D.K. Metcalf is predicted to go high within the first round Thursday night. The Rebels receiver is more than confident heading into the draft, saying that the no one’s seen a “D.K. Metcalf in the league yet.”

According to NFL.com, the 6-foot-3, 228-pound receiver has a prospect grade of 6.30 and will become an instant starter.

His Time at Ole Miss

Metcalf left the Rebels his redshirt sophomore season. During the 2018 season, Metcalf had 26 receptions for 569 yards and 5 touchdowns.

Throughout the season, Metcalf showed that he was ready. He says that no one can stop him on his routes.

He had an even better season the previous year. During the 2017 season, Metcalf had 39 receptions for 646 yards and 7 touchdowns.

Throughout his time at Ole Miss, he’s gotten good at manipulating defenders and developed quick feet.

During the 2019 NFL Combine, Metcalf had a stellar performance. Here were his results:

Because of his combine effort, he has secured his spot at the No. 1 wide receiver.

Overall, Metcalf feels confident going into this draft because of his performance at the combine.

No one will know for sure until Thursday night.

You can catch coverage of the draft on ABC, ESPN and NFL Network. Coverage begins at 8 p.m. on Thursday.

Sydney is a senior studying telecommunications with a specialization in sports media at the University of Florida. She is a multimedia sports reporter for ESPN 98.1 FM/850 AM WRUF and WUFT-TV.
Previous 76ers best Nets to advance to conference semifinals
Next Denver Strikes Gold Offensively in 108-90 Game 5 Win Over Spurs