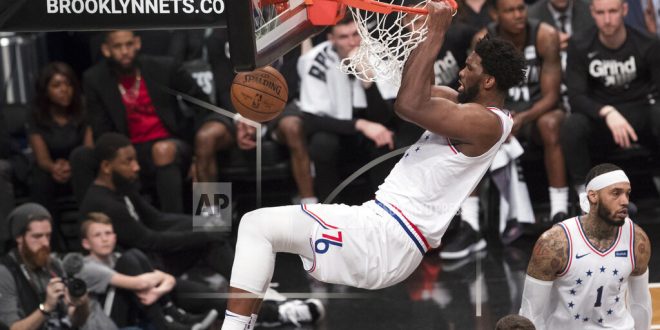 The Philadelphia 76ers are headed back to the Eastern Conference Semifinals for the second consecutive season. After falling to the Brooklyn Nets in Game 1, the 76ers came back to win four straight in dominant fashion. Tuesday’s 122-100 victory sealed a matchup with the Toronto Raptors in the second round.

Meanwhile, the Nets started 0-for-8 and did not put points on the board for the first six minutes. By the end of the first quarter, the 76ers set the tone with a 32-15 lead.

Even with Philadelphia’s stronghold on the game, the emotions of the series continued. Embiid took advantage of a depleted Brooklyn frontcourt all night, and capped it off with a baseline dunk over Rondae Hollis-Jefferson. He picked up a technical foul for pointing at the defender, but with a 41-17 lead, it didn’t matter much.

A 29-point halftime advantage was the largest in 76ers playoff history. They maintained a lead of at least 20 points for a remainder of the game.

The star center made his way to the bench at the midway point of the third quarter as he finished with a team-high 23 points and 13 rebounds. No Philadelphia starter played more than 27 minutes.

With the game well out of hand, the reserves added a little excitement as they tangled up in the final two minutes. Jonah Bolden, Greg Monroe, Dzanan Musa and Radians Kurucs were all ejected.

Ben Simmons joined Embiid for a nice 13-point night while holding D’Angelo Russell to eight points on 3-of-16 shooting.

The 76ers shot 51 percent to just 38.7 percent by the Nets for a strong performance on both ends of the court. Simmons liked the physicality he and his team showed in Game 5 and throughout the series.

The second-seed Toronto Raptors will be a tough test. The Raptors took a similar path to the second round as the 76ers, as they dropped the first game to the Orlando Magic before winning four straight.

Philadelphia posted a 1-3 record in its regular season meetings with Toronto. In that lone win, the Raptors were without their best player Kawhi Leonard.

The 76ers understand the road ahead is difficult, but the goal remains to win the NBA Championship.

“Obviously, it’s going to take a lot. You’ve got some great teams in the league. We’re about to play one of them. And the next one is either going to be Milwaukee or Boston. And then, you’ve got the West, which is pretty tough. We’ve just gotta take one game at a time, but we understand that we’ve got all the talent we need, especially to win it all.”