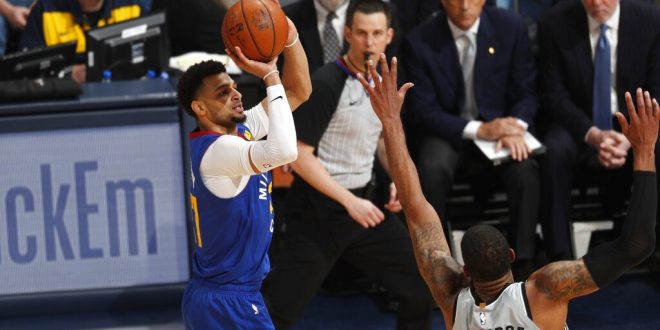 The Denver Nuggets struck gold on the offensive end of the court in Game 5. Six Nuggets scored in double-figures, led by Jamal Murray with 23 points.

The offensive jackpot for Denver propelled them to a crucial Game 5 win over the San Antonio Spurs 108-90. Now, the Nuggets are just one win away from clinching a spot in the semifinals for the first time in almost a decade.

In the previous four games of the series, Denver didn’t storm out of the gates. The Nuggets were outscored by a total of 31 points. In Game 5, they flipped the narrative.

The first quarter saw the Nuggets take a 26-19 lead. The Denver offense was fueled by a 50% shooting percentage from the field.

Murray’s 23 point outing wasn’t the only strong performance for Denver. Guard Gary Harris posted 15 points on 3-5 shooting from beyond the arc. Backup guard Will Barton, who has struggled during the series, went off. Barton finished 7-11 from the field. He even added five boards and three assists.

Center Nikola Jokic flirted with a triple-double. He finished the night 16 points, 11 rebounds and eight assists.

While the offense has garnered much of the attention following Tuesday’s win, the defense does deserve its time to be recognized.

The Nuggets held the Spurs to 29.2% from three.

Jamal Murray said the win can be attributed to the defense as much as the praise is given to the offense.

One of the toughest tasks a team has in the playoffs is closing out a series. That task is even more daunting when it can be done on the road. This is the challenge the Nuggets now face, being up 3-2 heading to San Antonio.

Nuggets head coach Michael Malone said Game 6 will be the biggest challenge this team has faced so far.

Murray said the keys for a Game 6 win are the same as they were in Game 5.

Previous D.K. Metcalf Ready for NFL Draft
Next Will Josh Rosen be a Cardinal next year?