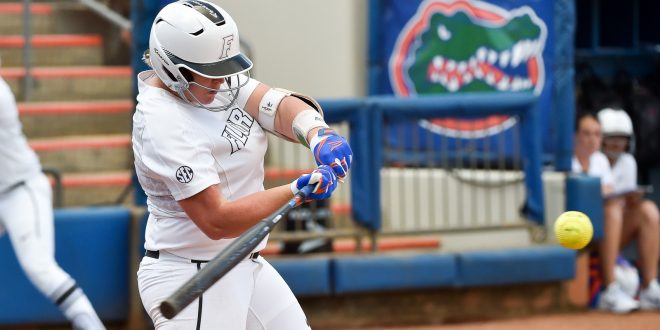 ... during the Gators' Softball game against the Oakland Golden Grizzlies on Wednesday, February 21, 2018 in Katie Seashole Pressly Stadium on the University of Florida campus in Gainesville, FL. UAA Communications photo by Jim Burgess

Jordan Roberts patiently waited her turn for an opportunity behind the plate. After two long years backing up veterans, the 2019 season would finally be her shot to take the starting job. That was until an unexpected obstacle appeared in the form of Kendyl Lindaman.

The moment Lindaman signed the papers to transfer from Minnesota, she became a star of the Florida Gators softball team. She hadn’t even put on a uniform yet, but she didn’t have to. Her past spoke for itself.

“It could have been easy for me to feel threatened,” Roberts said. “But for me, I wasn’t at all. I think I was more just excited to have her on the team, just because I never wanted that bad energy. I never wanted her to think that there was any animosity, that there was any negative competition. I just wanted her to feel welcomed and to feel like she could come to me for anything.”

As a junior, Roberts has established herself in the Florida program. It’s not like she spent the start of her career as a full-time benchwarmer. She’s got a pair of Women’s College World Series home runs under her belt, after all.

SHE DOES IT AGAIN!

Lindaman might have been a great player, but Roberts had her own impressive body of work. The thought that someone was coming in to take her spot never even crossed her mind.

She openly admitted her reaction to it likely would have been a bit different in years’ past.

“It just shows how you grow as a person when you get here,” Roberts said. “I think freshman year, I probably would have been a little worried that someone else was coming in, and maybe a little fearful that I wasn’t gonna catch as much. But now, I’m not really worried about it. I think that I’ve really grown as a player and as a person.”

While Roberts never feared losing her starting position, knowing Lindaman could always take it away from her pushes her to work even harder. Even if it’s something as simple as a warm up, she’s making sure to give her best effort because there’s no room to take steps backward.

Every athlete at any level needs that to keep from getting complacent.

The Gators seem to have a good dynamic going with the two splitting time on defense. Florida can’t afford to lose either of their bats, so when one is catching, the other takes over the designated player role.

Sure, the addition of Lindaman means fewer innings behind the dish, but it also means having someone to provide relief while playing five games in a tournament over the course of a weekend and having someone to lean on who is going through the exact same things.

That’s what head coach Tim Walton always had in mind. Today’s college softball landscape demands having two catchers who can get the job done. Putting one girl back there for 60-plus games just isn’t feasible.

“Catching is hard and catching is a big role,” Roberts said. “And having someone next to you that’s doing the same job as you is way more fun than feeling alone and kind of doing it on your own … I think that was the big thing for Coach Walton, is just making sure that we are thinking about the whole season, because it’s a long season, and having just me behind the plate, it’s not comfortable.”

Walton said he is proud of the way Roberts embraced Lindaman and he is constantly watching them make each other better as the season goes on. 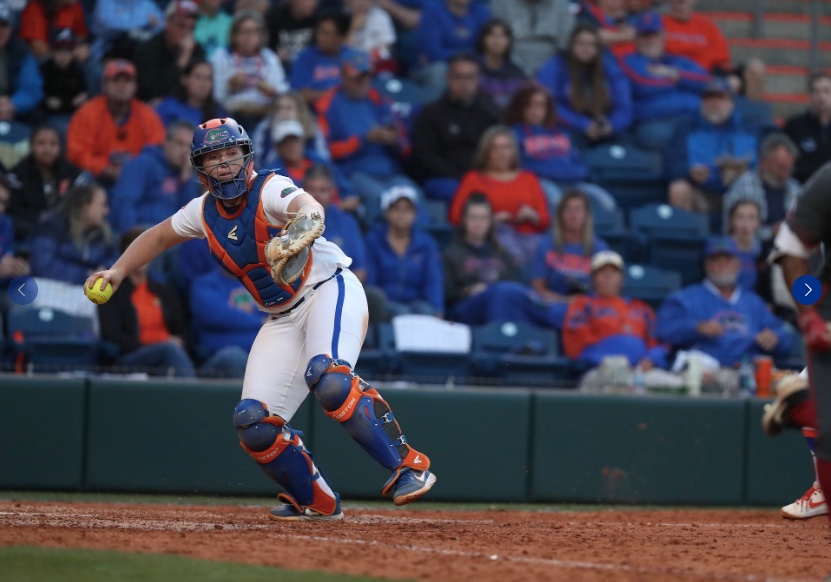 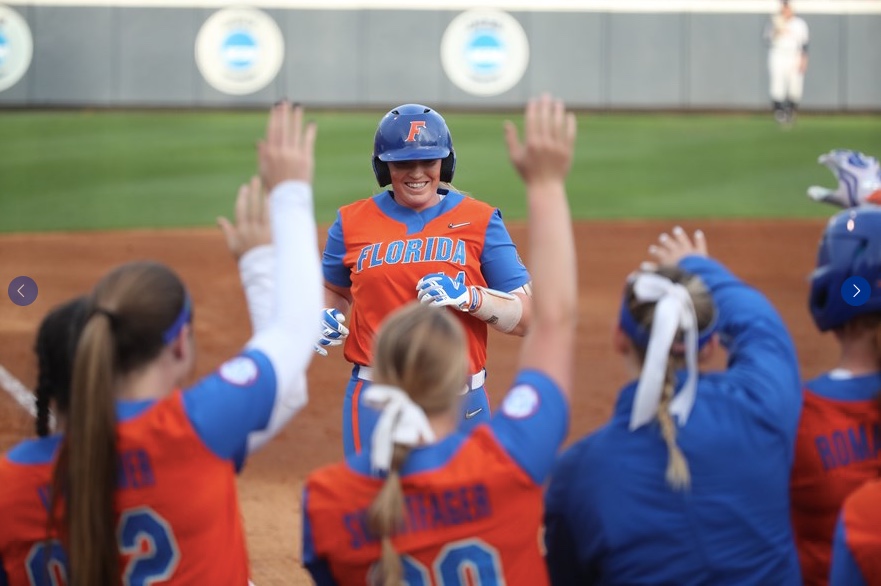 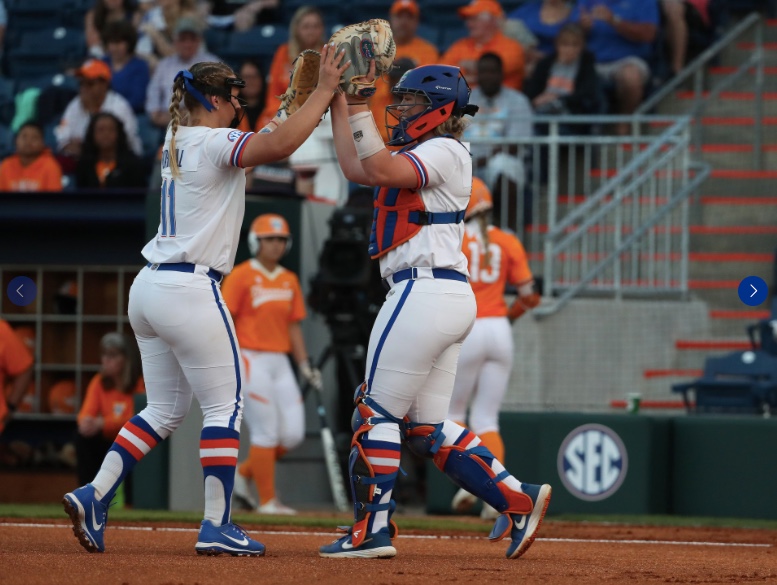 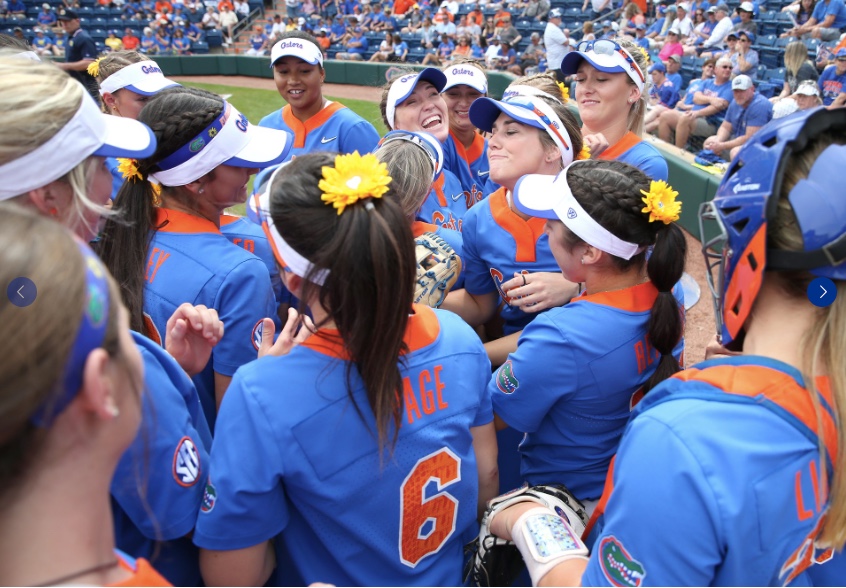 Through that hard work, Roberts raised her batting average and home runs while becoming an overall stronger defensive catcher. Very few runners have found success stealing on her this season.

When she first got to Florida, she dealt with the typical struggles of trying to fit in, find classes, manage the busy schedule of an athlete. Once she got past that, she found herself devoting more of her time to things outside of softball that were important to her, such as her faith.

Look out to the field before games, and Roberts can often be found leading her team in prayer. That is something she takes a lot of pride in. It has helped her grow stronger relationships with her teammates and become a leader for the Gators.

“As a parent, you always have high hopes of your child’s athletic career, and we are always proud of her success, but we are most blessed to see her influence with her teammates,” said her mom, Jackie Roberts. “We talk about it often that her best contribution may not be performance related but in her character and leadership.”