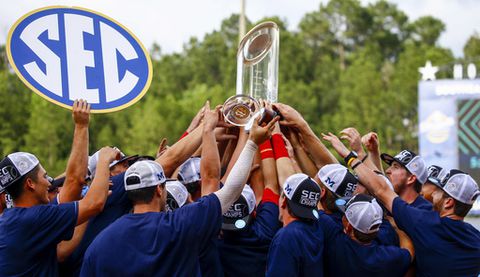 Post-season baseball is underway with the SEC Tournament set to begin on Tuesday in Hoover, Alabama’s Metropolitan Stadium.

The SEC, which boasts eight teams ranked in the Top 25 Coaches Poll, has led the pack in terms of the number of teams in the Top 25 each week. While the SEC has always had a reputation for being one of, if not the toughest conferences in college baseball, following this season’s success, the former reputation may have been surpassed.

The @SEC has had the most teams ranked in the Top 25 every week this season.

In short, college baseball fans in the Southeast are in for a real treat this week as baseball takes over the SEC.

In the opening game of the SEC baseball tournament, the Florida Gators and the Texas A&M Aggies will square off on Tuesday at 10:30 a.m..

The two baseball squads didn’t meet in the regular season in what some people call a blessing and others call a curse. Whichever you believe, the only thing that matters is that neither school has seen the other and what they bring to the plate.

The two teams are both coming off of a hot streak in taking two of their last three conference series.

That saying couldn’t be more true for two squads who will have to pitch well during their opening game.

Florida has struggled from the mound all season long. However, it seems that they improving behind right-handed ace, Tommy Mace (5.18 ERA) and his relief, Jack Leftwich (5.82 ERA) who brought home co-pitcher of the week honors this last weekend.

The winner of Florida and Texas A&M will go on to face Georgia in the second round on Wednesday at 10:30 a.m..

Also going at it on opening day of the SEC tournament is the Missouri Tigers and the Ole Miss Rebels who will take the diamond at 2:30 p.m..

Unlike the first matchup, Missouri and Ole Miss have met each other earlier this season back in March. The Rebels left Columbia, Missouri having dropped the series 2-1.

Again, looking at similar batting statistics, the Tigers bat .267 as a team while the Rebels have acquired a .282 batting average.

As for pitching, Missouri has the edge behind lefty TJ Sikkema (1.32 ERA). For the Rebels, Will Ethridge (3.16 ERA) is slated to start from the mound for the Rebels on Tuesday.

The winner of the Tiger – Rebel matchup will go on to play Arkansas on Wednesday with the time TBA.

The Volunteers and the Tigers will meet again in the opening day of the SEC baseball tournament at 5:30 p.m. in a rematch of a regular season weekend series. Tennessee swept Auburn back in mid-March to open up conference play for both teams.

However, like post season play often reminds us, we are likely looking at two very different baseball teams.

Earning the ace spot for the Volunteers is right-hander Garrett Stallings (3.12 ERA) who boasts a winning record of 8-3. For the Tigers, fellow righty, Tanner Burns gives Auburn the pitching advantage with his 2.80 ERA.

The game three winner between Tennessee and Auburn will take on Vanderbilt at 5:30 p.m. on Wednesday.

Like the first matchup of the opening day, South Carolina and LSU, who will face off in the last game of the opening day at 9 p.m., also know very little about each other being that they didn’t meet in the regular season.

As a team, LSU bats a .271 batting average while South Carolina bats a .236. While the Gamecocks aren’t as consistent with their hitting, they have tallied 75 homeruns this season; this is compared to the Tigers’ 56 homeruns on the year.

From the pitching rubber, LSU has two co-aces, if you will. Having both pitched 63 innings apiece, the right-handed duo in Eric Walker and Zack Hess have shared the pitching duty for the Tigers. The two combine for 4.93 ERA.

The Gamecocks also share their pitching duties among three righties with Reid Morgan pitching a majority of the time. Morgan gives South Carolina the pitching edge with an ERA of 3.80.

In wrapping up game four of opening day, the winner between the Gamecocks and the Tigers will be matched up with Mississippi State on Wednesday with the time TBA.

No. 1 seeded Vanderbilt, No. 2 seeded Arkansas, No. 3 seeded Georgia and No. 4 seeded Mississippi State all await their fate having earned themselves a bye game in the opening round of the SEC tournament.

The second round of the tournament brings on double-elimination matchups which begin with the winner of Florida – Texas A&M and Georgia on Wednesday at 10:30 a.m.

Ainslie is a journalism major at the University of Florida where she specializes in Sports Media. Her main passion is college football as it was a huge part of her childhood. Ainslie serves as a current correspondent for the Ocala Star-Banner, a newspaper for the Ocala, Florida area. She currently covers Marion County high school sports.
Previous NBA Conference Finals: Warriors Look to Sweep, Raptors Seek to Even the Series
Next Warriors Head to Fifth Straight Finals After Sweeping Portland