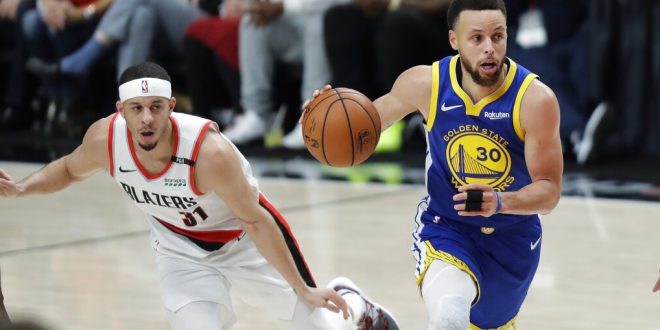 NBA Conference Finals: Warriors Look to Sweep, Raptors Seek to Even the Series

Golden State will attempt a series sweep against the Portland Trailblazers despite the initial series preview of a five-game Warriors win.

The Warriors could potentially be the Conference Finals champions due to the Blazers inability to hold on to an 18-point lead in game three and having their best player, Damian Lillard nursing separated ribs.

Despite the factor of the Warriors playing without their two superstars, Kevin Durant and DeMarcus Cousins, the Splash Brothers along with Draymond Green have stepped up to the plate to fill any void.

However, the injury list for the Warriors keeps growing.

Without Iguodala,  Jonas Jerebko and even Alfonzo McKinnie are expected to get some playing time.

However, the Warriors superb defense and efficient scoring have hindered the Trailblazer’s performance.

Lillard and other key players averages have been lower.

According to goldenstateofmind.com, Lillard is averaging just 20 points in nearly 40 minutes per game, and scoring at a sub-par efficiency of .539 TS%. And CJ McCollum hasn’t fared much better with just 20.7 points in about 38 minutes per game at a downright bad TS% of .449.

Lillard is expected to play in tonight’s game with nothing to lose and no significant risk of further injury.

Steve Kerr has this to say about defending Portland stars, Lillard and McCullom:

It’s easily expected that Golden State will fight hard for a win tonight rather than head back to Oakland for yet another game.

Tune into ESPN at 9 p.m. to watch the Conference Finals for a suspenseful, exciting game with Golden State vs. Portland.

The Bucks take on the Raptors this Tuesday night. Milwaukee currently leads the series 2-1.

The Raptors won a much-needed victory on Sunday in double overtime with a final score of 118-112.  Neither the Bucks nor the Raptors played an excellent game. Turnovers and fouls seemed to overshadow game 3.

Leonard took control of the game when Giannis Antetokounmpo fouled out in double overtime with 4:24 on the clock left in the game.

Furthermore, Leonard had a great performance for the Raptors, scoring 36 points and playing 52 out of 58 minutes, with eight of his points coming into play in the second overtime according to cbssports.com

Leonard led his team to victory despite the fact that both Kyle Lowry and Norman Powell fouled out during regulation.