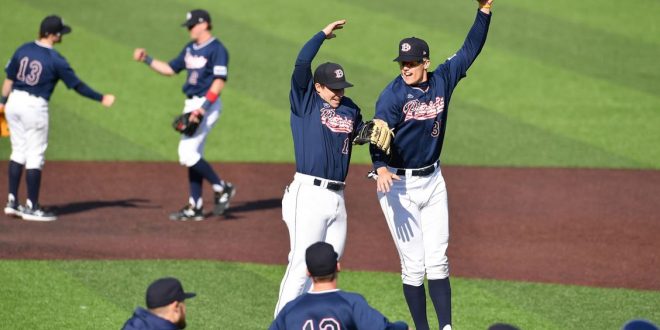 The Dallas Baptist Patriots are headed 350 miles west to Lubbock, Texas to compete in their sixth straight Regional in the NCAA Baseball Tournament.

Dallas Baptist is no stranger to the Lubbock Regional.

This is the fourth time the Texas Tech Red Raiders hosts the regional. Moreover, the Patriots featured in the 2016 Lubbock Regional and are headed to their second appearance. Dallas Baptist’s competition in 2016 included New Mexico, Fairfield and Texas Tech.

Then, DBU won three out of its five matches. Nevertheless, The Red Raiders advanced to the NCAA World Series despite losing one of the two games played against the Patriots.

This time, the Raiders enter the regional stage as second seed ahead of third-seeded Florida and fourth-seeded Army.

The Gators should expect the Raiders’ offense to be explosive.

Play-by-play voice for the Dallas Baptist Raiders, Brendan Smith,  shared that this is the most balanced offense the Raiders have had ever since he started calling games back in 2012.

Junior Bryce Ball is the player who has hit the most home runs, 17, going into the Lubbock Regional.

Hitting is not the only way to hurt teams offensively. Augie Isaacson and Luke Bandy are base criminals who have stolen 20+ bases each this season.

Smith is not too sure who’s going to start on the mound for the Raiders. Furthermore, Smith believes that either left-handed pitcher Jordan Martinson or right-handed pitcher MD Johnson will start.

On the other hand, Johnson enters regionals with nine wins, two losses and a 246 era.

Expect Dallas Baptist University to show up and play some top-notch baseball at the Lubbock Regional.

Figuring out a plan to make it big in the soccer scene in the U.S. or anywhere else in the world. For now, I'm having a blast writing for ESPN Gainesville and learning a lot from managers and students around the workplace. I'm covering the TV beat for Gators Soccer. What a team! Follow me on twitter: @J_AguerrevereUF
@@J_AguerrevereUF
Previous NBA Finals: Raptors vs. Warriors Game 1
Next Resilliancy Is Key For Army As It Prepares For NCAA Baseball Regionals