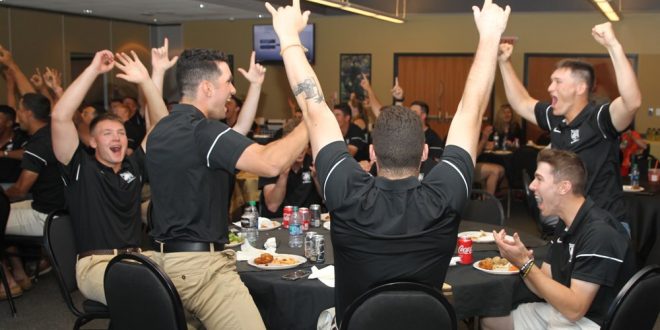 The Black Knights’ head coach, Jim Foster, is used to being the underdogs, but he also knows that his team deserves to be in the tournament after a season that forced them to be resilient.

Army’s Matchup on Paper Means Nothing

Following the regular season’s conclusion, where the Black Knights finished with an overall record of 35-24, Foster understood exactly how his team achieved that successful winning record.

Instead of focusing on hitting everything out of the park, the Knights played outstanding defense and fundamentals. The team hit a combined 27 home runs on the season.

Leaning heavily on the basics and playing sound defense is a testament to the Cadet’s experience.

This season’s roster features nine seniors compared to last season’s two. Playing in the regionals is particularly special for the seniors because they graduated in the spring.

Foster has the benefit of sending out a number second lieutenants tomorrow night, including left-handed pitcher and captain, Cam Opp, who may start at the mound.

Foster’s decision on who he will send to the mound first has yet to be decided. Picking between pitchers that he is confident can win is a problem he enjoys having.

Options for starting pitcher include senior captains Cam Opp, Tyler Giovinco and Daniel Burggraaf. No matter who Foster sends to the mound first, he will need everyone to step up.

A team built around solid defense still needs to find ways to get on base. Foster can expect junior Outfielder Jacob Hurtubise to do just that.

M8th | Hurtubise with a 2⃣-RBI single to centerfield to help increase Army's edge to 7-3.

Flannery will stay on the hill after closing out the bottom of the seventh. pic.twitter.com/ll0ZHFxtOg

Saying that Hurtubise can make things happen is an understatement. That was evident during the regular season as he stole 45 bases. He constantly finds himself on base thanks to his .383 batting average.

For a team that does not hit many home runs, consistency from someone like Hurtubise goes a long way.