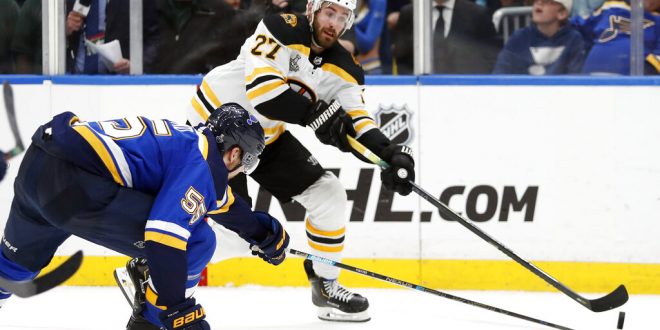 Blues defeat Bruins in Game 4 of the Stanley Cup, Tie up series

The St. Louis Blues rebounded from an ugly Game 3 loss to beat the Boston Bruins 4-2 in Game 4 of the Stanley Cup Final Monday night.

Star center Ryan O’Reilly needed just 43 seconds to end his eight-game scoring drought. He slotted home a rebound early in the game to give the Blues a 1-0 lead.

But this would not signal a straightforward contest for the Blues, who are looking to take home their first Cup.

After scoring the past two games, Bruins center Charlie Coyle once again had something to say. He cashed in on a rebound of his own later in the period to level the game.

Vladimir Tarasenko restored the Blues lead to close out the period, though, after Tukka Rask spilled another shot in front of his net. This was Tarasenko’s 11th goal of the playoffs.

A moment of concern for Boston occurred in the second period, when captain Zdeno Chara was forced to leave the game after being hit in the face with a puck. His status for the next game is uncertain.

Seconds into a second period St. Louis power play is when the Bruins evened up the game again. Boston defender Brandon Carlo got forward and scored yet another rebound to even the game 2-2. It was the fourth shorthanded goal the Blues have allowed in the playoffs.

Wild stat (although typical for this postseason): The Blues are the 1st team in NHL history to win 4 games in a single postseason in which they allowed a shorthanded goal; they are 4-0 in such games in these playoffs. (via @ESPNStatsInfo)

O’Reilly would cap off a strong all-around performance with the go-ahead goal ten minutes into the third period, and winger Braden Schenn sealed the game with an empty netter later in the period.

Schenn recorded an assist on top of his goal  in what was a strong bounce-back game after failing to record any points in Games 2 and 3. He also led the team with 5 hits.

Rookie goaltender Jordan Binnington also had a good showing after a game 3 drubbing in which he was pulled for the first time in his career. He is now one win away from tying the record for the most ever wins by a rookie goalie in a postseason.

Also, Vince Dunn and Oscar Sundqvist both returned to the lineup for the Blues. Dunn returns after an 8 game absence, and Sundqvist was suspended in game 3 for a hit on Bruins player Matt Grzelcyk. In Sundvqist’s return, he helped to improve St. Louis’ penalty kill by deflating both Boston power plays last night. In Sundqvist’s absence in Game 3, Boston was 4-4 on the power play.

Blues coach Craig Berube spoke about how his team did “all the little things right” after the game.

Last night was the first home win in Stanley Cup Final history for the St. Louis Blues since they entered the league in 1967. The series continues Thursday night when the teams travel back to Boston for Game 5.

I'm a senior journalism student at Florida. I love sports, and I love covering sports. I'm one of the beat writers for the Gator soccer team right now, and if you follow me on Twitter @johnmiceli13 you'll never miss a soccer update
Previous 2019 NCAA Baseball Tournament Update
Next MLB Draft: Gators Await Potential Picks