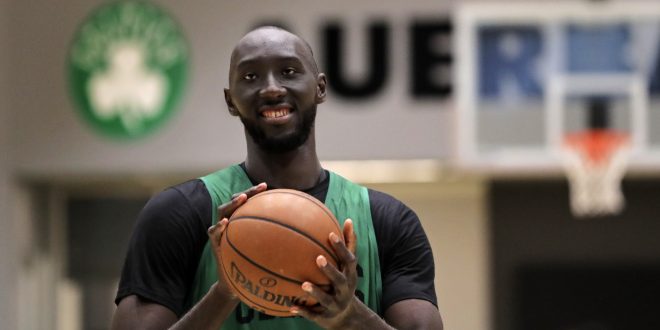 Boston Celtics rookie Tacko Fall, of Senegal, smiles as he shoots free throws after an NBA basketball practice at the team's training facility in Boston, Monday, July 1, 2019. Fall, who is about seven and a half feet tall, played previously for Central Florida. (AP Photo/Charles Krupa)

Former UCF center Tacko Fall signed a one-year contract with the Boston Celtics and will play in the Las Vegas Summer League.

The 7-foot-6-inch big-man ended his tenure at UCF as the school’s all-time leader in blocked shots with 280. Fall averaged 11.1 points 7.6 rebounds and 2.6 blocks a game during his senior campaign.

Like other 7-footers that came before him, Fall’s game is unpolished. He struggled from the free throw line in the 2018-19 season, only shooting 36.2 percent. As a result, Fall went undrafted.

However, Fall’s unique height and weight (301 pounds) helped the big-man dominate games as he towered over his opponents. Fall left collegiate basketball with a field goal percentage of 74 percent, which is the highest in NCAA Division I history.

Fall and the Knights were eliminated by No. 1 Duke with a final score of 77-76 in the NCAA Tournament. Fall scored 15 points and blocked three shots in his last game at UCF.

Fall’s contract with the Celtics is an Exhibit 10 contract, which is a special non-guaranteed deal. It allows the team to have up to 20 players on their roster before the regular season begins. In addition, if the player is waived before the season begins, the player would be eligible for a $50,000 bonus if he were to join the team’s G-League affiliate.

Tacko Fall will sign an Exhibit 10 contract with the Boston Celtics, a source told ESPN. Pencil in July 8th at 430 at Thomas and Mack for your first TACKO Vegas Summer League fix.

The prospect of having a physical phenom like Fall might be too good to pass up. The Celtics lost former Gator Al Horford to the Philadelphia 76ers in free agency and will miss his presence down low.

With the addition of All-Star point guard Kemba Walker, the Celtics are expected to bounce back after a disappointing season. Fall and the Celtics play their first Summer League game on Saturday at 5:30 p.m. against the Philadelphia 76ers on ESPN.