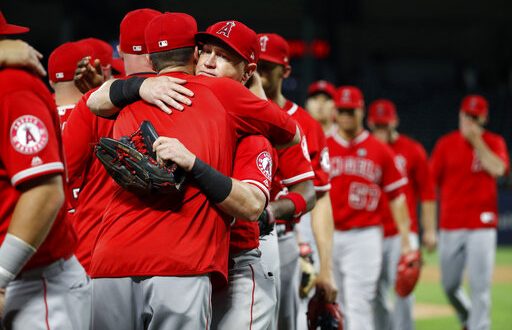 Just one day after the passing of pitcher Tyler Skaggs, the Los Angeles Angels took the field without their teammate. They returned to the diamond Tuesday night for their matchup against the Texas Rangers. The Angels picked up the 9-4 win over the Rangers. While the win brought momentary bliss, the team is still trying to comprehend the tragedy.

Winning the Game, Losing a Brother

The Angels win was fueled by a four-run explosion in the sixth. The night was capped off with a two-run home run in the eighth inning by Kole Calhoun. As Calhoun crosses home plate, he points to the heavens for his fallen teammate. Even though he wasn’t physically present Tuesday night, Skaggs’ spirit was there. He played a vital role in helping his team win.

Trout said the game helped take their minds off of things for a few hours. However, the bond the team had with Skaggs is bigger than a game.

Skaggs’ No. 45 was visible throughout the Global Life Park in Arlington. Before the game, Skaggs’ uniform was hanging in his locker. His No. 45 was on the mound. The jersey was even brought out of the clubhouse, where it was hanging, for the pre-game moment of silence.

Heaney says no planning went into the tribute.

Patrick Corbin writes 45 on the mound to pay tribute to his best friend Tyler Skaggs. pic.twitter.com/tUVbZRb3mK

The tributes were spread throughout Major League Baseball.

Washington Nationals pitcher Patrick Corbin wore No. 45 in memory of his best friend.

The Angels currently sit four games back for the second and final Wild Card spot. The “dog days of summer” are here for MLB teams. The Angels face a greater uphill climb compared to other clubs. Coping with the loss of a valuable member to their baseball family while finishing the season.

Trout said the loss of Skaggs will affect his team for the rest of their lives.

The Angels and Rangers face off tonight to end this three-game series. Then, the Angels head to Houston to face the Astros before the All-Star break. The first home game for the Angels following Skaggs’ passing is after the break on Jul. 12.