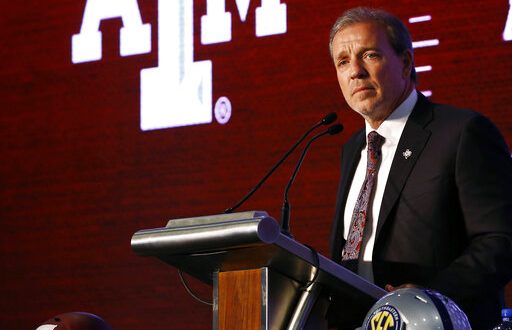 College football is right around the corner and that’s evident with SEC Media Days in full swing. Day 2 saw Jimbo Fisher talk about what Texas A&M brings to the table in his second season.

Jimbo Fisher’s first year in College Station ended with a thrilling seven overtime win against LSU and a thrashing of NC State in their bowl game. Going into Fisher’s second year, the Aggies get a quick turnaround with arguably the nation’s hardest schedule.

Throughout the season A&M must travel to Clemson and Georgia while hosting Alabama; three teams that could open the season ranked one, two and three.

“We want to take care of our own, and they are great teams, ” Fisher said. “But we expect to play with them and compete with them and win those games. That’s why we’re here.”

Jimbo Fisher on his players constantly hearing how tough Texas A&M’s schedule is this season (‘If a dog doesn’t bite when he’s a pup he’s not going to bite when he’s a dog’): pic.twitter.com/qUQrpWboZP

As Texas A&M will navigate through a tough schedule, leading them will be one of the conference’s best quarterbacks. Kellen Mond enters his third year as he hopes to take the Aggies to the next step.

Mond took a leap from his freshman to sophomore year as he more than doubled his passing yards and threw three times as many touchdowns (3100 yards and 24 TD’s in 2018). The dual-threat QB will look to make even more strides heading into the season.

Kellen Mond is confident heading into the season. When asked how he stacks up against the other SEC quarterbacks: “In my opinion I’m the best one. Not just because I’m a confident person, but I actually believe that.” pic.twitter.com/M71snxssQM

Wherever Jimbo Fisher is, running the ball is a huge part of the offense. Trayveon Williams was the SEC’s leading rusher last year and Fisher will ensure the Aggies stay committed to the ground game, especially with a guy like Kellen Mond at the helm.

“I think first of all, it starts up front,” Fisher said. “Our offensive line, we have five guys that started multiple games. We have over double digit games coming back. We have a great group of young guys coming in.”

A New Year’s Six bowl is what this football program hopes to get to in 2019.  With a talented roster, experienced coaching staff and schedule to prove it, Texas A&M has the ability to make noise not just in the SEC but on the national stage as well.