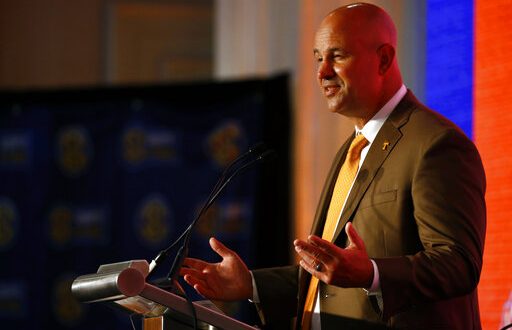 After an up-and-down first season as head coach of the Tennessee Volunteers, head coach Jeremy Pruitt looks to take the next step at Tennessee.

A rebuild in full swing

It took Tennessee some time to find their next head coach a year ago; coaches turning the job down, fans rallying against certain hires and the like. Now, they’ve got their guy and Jeremy Pruitt is fully committed to a rebuild in Knoxville to turn this program around.

Jeremy Pruitt: I'm as excited about this football team as any I've ever been around". #Vols #SECMD19 pic.twitter.com/JDK5kj6nqT

Fixing both sides of the ball

It was evident that the Volunteers struggled in all three phases of the game last season; offense, defense and special teams. With a top 15 recruiting class going into the season, Pruitt and his staff will have the opportunity to improve the skill positions and get to work in the trenches.

Pruitt talked about what he saw from his players in his first year and how he recruited to fix what he didn’t like. He’ll look for his returning players to make strides while plugging in the new recruits.

“We knew how we wanted to plug them in,” Pruitt said. “So we recruited to the team that we had. So we’ve made lots of strides. I think it’s important for us that for the first time we had enough bodies up front to practice the right way this spring.”

Of his 30 minutes allotted at SEC Media Days, Pruitt spent 21 minutes addressing the media leaving little time for questions. This was done so he can address the state of his football team to insure the rest of the conference that the Volunteers are coming and their ready to play.

“You know, when you look at your staff, you know, right now, that’s what we’re selling at Tennessee, the vision that our staff has,” Pruitt said. “The men on this staff have been a part of 16 national championship staffs, okay, so we’ve seen greatness. We know what great looks like.”

Jeremy Pruitt on year one to year two: “it’s been a lot smother in everything that we’ve done the second time around”. #Vols #SECMD19 pic.twitter.com/VPXTWuUFfW

SEC Media Days signal the start of the college football season and many questions still loom around these teams. All that can be said is answers will start coming in August 24 when the Florida Gators and Miami Hurricanes kickoff the 2019 season.