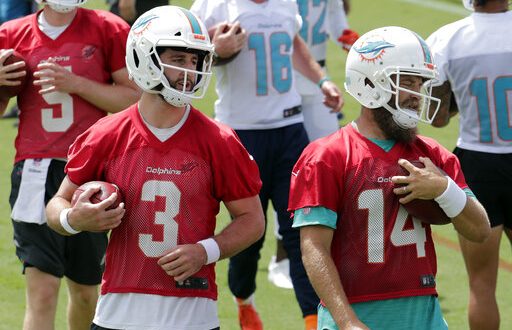 Fitzpatrick Pulls Ahead in Quarterback Battle for the Miami Dolphins

Veteran quarterback Ryan Fitzpatrick has separated himself from Josh Rosen in the battle for the starting position on the Miami Dolphins. If the season started today, Fitzpatrick looks to be the starter.

The Dolphins entered their training camp without a clear starter as both Rosen and Fitzpatrick joined Miami in the offseason. Dolphins head coach Brian Flores announced on Tuesday that Fitzpatrick is leading the quarterback battle and why.

Furthermore, Fitzpatrick’s experience is apparent in training camp. The 14-year veteran understands the role that a quarterback has to play on a winning team.

Meanwhile, second-year quarterback Josh Rosen spoke on how he views the competition and how he has learned from Fitzpatrick during training camp.

Rosen once had NFL teams foaming at the mouth for an opportunity to have the UCLA star under center for their respective football teams. After one season, all it took was two draft picks for the Dolphins to acquire the former 10th overall pick.

After being selected by the Arizona Cardinals in 2018, Rosen failed to show that he was their quarterback of the future after posting 11 touchdowns and 14 interceptions in the 2018 season. The Cardinals finished the year 3-13 and had the first overall pick in the 2019 draft. They could not afford to pass on drafting 2018 Heisman winning quarterback Kyler Murray.

With Murray being the clear quarterback of the future, Rosen was traded to the Dolphins on April 26 for a 2019 second-round pick (No. 62 overall) and a 2020 fifth-round pick. The Dolphins signed Ryan Fitzpatrick earlier in March to a two-year, $11 million deal and the rest is history.

The Dolphins ended last season 7-9 and have a history of inconsistent quarterback play. However, Fitzpatrick has proved himself to be a solid starting quarterback and will be a mentor going forward for Rosen, who is the expected quarterback of the future. Fitzpatrick will be 37 in November and Rosen can use this time to learn from the veteran.