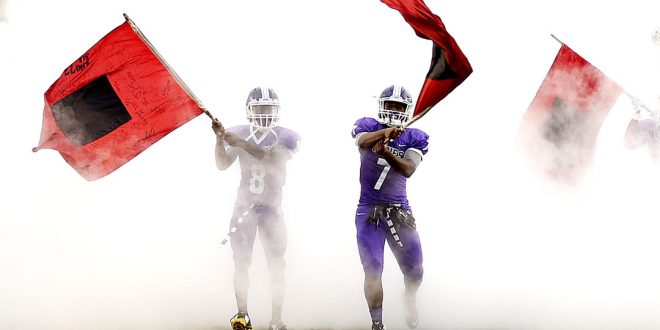 Last year, Patrick Miller’s Gainesville Hurricanes put up a 7-3 regular-season record before being eliminated in the opening round of the playoffs. This year, many districts have been redrawn giving the Hurricanes new opponents and new challenges. One of those challenges coming from inexperience with the schedule.

Last season, the Hurricanes finished the year at the second spot in their district rankings. Ocala’s Vanguard Knights swept the competition in Class 6A District 5 going 5-0; a loss to the talent-heavy Knights was the only district loss for the Hurricanes.

While the Hurricanes no longer have to square off against Vanguard in district competition, their new district brings just as many challenges.

When head coach Patrick Miller joined Steve Russell on Sportscene, Miller couldn’t help but let out a chuckle when asked about the new district.

Miller went as far to call the new district “district from the ‘H'”. You can use your imagination as to what that might mean.

New to Gainesville’s district competition on Jacksonville’s Lee High School Generals, who boasted a 10-2 record last season. Of the Generals’ 10 wins, two came from playoff victories before being eliminated by Edgewater in the region final.

Miller and his Hurricanes also get to look forward to playing Columbia; a team they are more familiar with but have never played with district implications. The Columbia Tigers out of Lake City also mustered together a 10-2 record, which included a victory over the previously mentioned Lee Generals in the regular season. However, those same Generals vengefully eliminated the Tigers in round two of the playoffs last season.

In all, not having to look at Vanguard’s name on your schedule every year is something to look forward to. However, adding teams like Lee and Columbia takes away some of that warm and fuzzy feeling.

When explicitly asked if depth was a concern, Miller was quick to respond that it wasn’t. Instead, he fears that many of his players’ lack of playing experience is the main hurdle.

Considering his team’s youth and inexperience, it can sometimes be difficult for veterans to find the desire and patience to provide guidance. According to Coach Miller, this isn’t the case with his team. Of the guys he has returning, many of them have taken the leadership role and owned it.

Miller was sure to commend offensive lineman Austin Register and defensive tackle Gentle Hunt for their adopted leadership roles.

With a new season and a new pool of district opponents, Patrick Miller and the Gainesville Hurricanes are still working tirelessly to prepare for the coming season. They will open up their year at home with Superior Collegiate, which kicks-off 10 days from now on Aug. 16.

Ainslie is a journalism major at the University of Florida where she specializes in Sports Media. Her main passion is college football as it was a huge part of her childhood. Ainslie serves as a current correspondent for the Ocala Star-Banner, a newspaper for the Ocala, Florida area. She currently covers Marion County high school sports.
Previous Brady and Patriots Agree to Two-Year Contract Extension
Next Consistency, Leaders and CJ McWilliams: Key Points From Mullen’s Press Conference