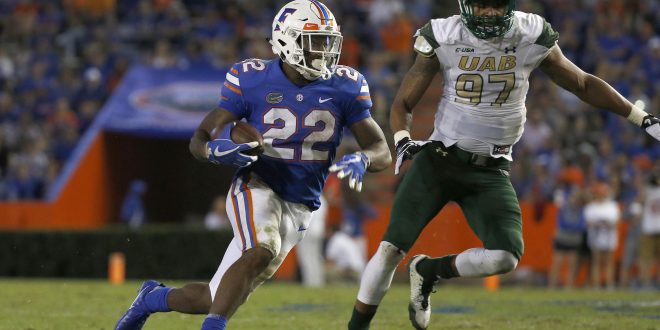 What’s In Store For Florida’s Running Back Corps?

The A tough UF running back assembly is amped up for the season opening showdown against Miami.

So much so, starting back Lamical Perine said he was “tired of hitting each other and ready to go hit some Hurricanes.”

But how exactly has that level of confidence shaped up? Once an underdog in his recruitment, Florida sought three-star Perine out of Mobile, Ala. But the senior’s success is one of many viable products of the transformative Dan Mullen era.

The Present and Future, Combined

In two years under coach Jim McElwain, Perine rushed for a total of 983 yards. But in just one year under Mullen, he notched 826 yards as the backup to Jordan Scarlett.

Now as a senior, questions have emerged as to whether Perine can become the first Florida back to claim a 1,000-yard season since Kelvin Taylor in 2015. The speculation isn’t too farfetched after an explosive 2018 season. Perine’s physicality and speed put him in the right position to succeed Scarlett.

Lamical Perine: "I feel like I'm an alpha dog. I've been in a lot of big games, made a lot of big plays." #Gators

Behind Perine is Malik Davis, who despite back-to-back season-ending injuries, sits second on the depth chart. Davis was a member of the All-SEC Freshman Team following a 526-yard rushing performance through seven games; but was derailed early in his sophomore season and took a medical redshirt.

"I feel like this off season I took my game to another level" pic.twitter.com/GkLuFlGtrm

Davis being second might come as a surprise; especially when considering Dameon Pierce’s true freshman season. Pierce proved himself a solid third option behind Scarlett and Perine, collecting 424 rushing yards in 13 games. It’s likely Pierce will remain in this role for the 2019 season, but may find more opportunities than last season’s 69 touches.

In the reserve roles come redshirt freshman Iverson Clement and summer enrollee Nay’Quan Wright. Clement saw action in just two games, compiling 17 yards on four attempts. Clement is often mentioned as a player who can move to defense if necessary, taking practice reps at safety. Meanwhile, Wright looks to redeem himself in college after an injury ended his high school football career. Once ranked as high as 23 in the nation, Wright plummeted into the top 300, but remained a four star prospect.

Florida’s running back corps possesses a dynamic group with plenty of talent ready to be unleashed in the season opener against Miami.