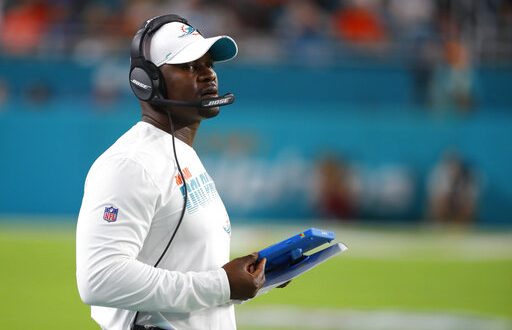 The Miami Dolphins kick off their season at home against the Baltimore Ravens on Sunday at 1 p.m; the game is one of the first of seven Sunday games to usher in the NFL’s 100th season.

The game is also a milestone for head coach Brian Flores as it will be his first game coaching the Dolphins. Flores inked a five-year, fully guaranteed contract back in February after spending 14 seasons with Miami’s rival, the New England Patriots.

Flores won’t be the only new face on the Miami sideline this Sunday. In fact, most of the Dolphins’ 53-man roster is new to the organization.

Incredible stat: Just 22 current Dolphins players were on their roster in 2018.

Among the new faces is starting quarterback Ryan Fitzpatrick. The 36-year-old quarterback came to Miami in May after spending 14 seasons with seven different teams.

Fitzpatrick acknowledges that his vast experience should benefit the young Miami roster.

Even the players protecting Fitzpatrick are new to the team, as the only starting offensive lineman to return from 2018 is right tackle Jesse Davis. Left tackle Laremy Tunsil was also supposed to start Sunday’s game, but the Dolphins traded him to Houston in a blockbuster deal on August 31st.

Full Terms: The #Texans get LT Laremy Tunsil, WR Kenny Stills and a fourth rounder. … The #Dolphins get 2 first-rounders, a second rounder, ST Johnson Bademosi and OL Julien Davenport, per me, @MikeGarafolo and @TomPelissero.

The massive trade gives Miami a total of 13 selections in the 2020 NFL Draft, including two projected compensatory selections. On top of that, the team has nine selections scheduled in 2021 as well.

Despite many fans and experts alleging the Dolphins of ‘tanking,’ or purposely losing to acquire more draft picks, Flores claims the opposite.

Brian Flores again adamant that that the Dolphins aren't tanking. He says it's disrespectful to say this. We're going to try to win every game. He says he feels good about his team.

Needless to say, it could be a long season for Dolphin fans.

Coming off a 10-6 record and a division title, the Ravens enter Sunday’s game in Miami Gardens as the overwhelming favorites.

Second-year quarterback Lamar Jackson has high expectations surrounding him, and Flores knows the Dolphins will need to keep a special eye on the dual-threat quarterback.

With Jackson and running back Gus Edwards leading the way, Baltimore led the league in rushing attempts last season. However, the team still signed veteran running back Mark Ingram to aid their run-heavy offense.

Defensively, the Ravens allowed the second-least points in the NFL last year and could repeat their success this season. Despite losing linebacker C.J. Mosley and safety Eric Weddle, Baltimore added safety Earl Thomas via free agency.

The Ravens won the last two meetings against the Dolphins by a combined score of 78-6 and they have won four of the last five meetings with Miami.