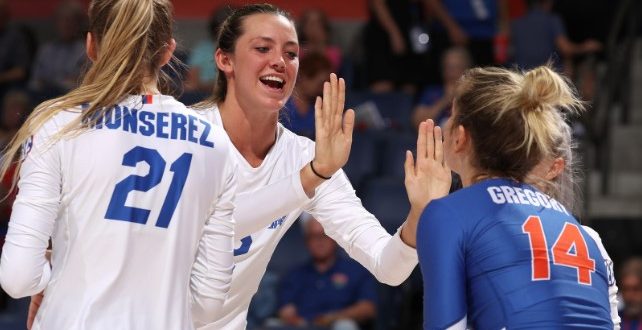 It is the third time this four-game winning streak that Florida defeated the ‘noles in straight sets. Florida is now 43-20 in the all-time series.

The teams exchanged blows in the first set and the second set was fueled by comebacks from both squads. Florida rallied from an early 10-4 deficit to push it within one, Florida State responded but a seven-point service run put Florida up 21-16.

The Noles stormed back to tie it at 24 but Florida claimed the set 27-25 thanks to a service ace from Holly Carlton.

Florida came out like gangbusters in the final frame. They catapulted out to a 14-3 lead in set 3 and finished off the Seminoles 25-14.

Florida continued its offensive hot streak as it posted a .322 hitting percentage. That figure is second only to the .345 Mary Wise’s squad put up in the five-setter against Long Beach State.

Outside hitters Thayer Hall and Paige Hammons sat atop the leaderboard in kills for this match. Hall posted 15 and Hammons threw in 10 of her own.

Additionally, Hall picked up 12 digs to record her fourth double-double this season.

Wise on the outside hitters:

Marlie Monserez accounted for 40 of Florida’s 49 assists Tuesday. Monserez is coming off a match where she posted a career-best 52 dimes against LBSU.

“From an offensive standpoint, I thought Marlie was her best today,” Wise said. “It’s pretty heroic what she’s doing to be able to control the ball as well as she was, and as a result, giving our hitters such good looks.”

Middle blocker Lauren Dooley built off her career day against LBSU with nine kills on a .692 hitting percentage. She took more swings in her last two matches (36) than her entire career combined (25).

Wise said the team recruited her to enroll early to get an opportunity to begin the development process earlier. The coaching staff didn’t see this out of Dooley in the past month until a week ago.

She said having her in the three-hitter rotation has been asset for Dooley.

“She’s playing with a lot of confidence right now,” Wise said. “She can hurt peoples’ feelings with her block… she’s just swinging so fast and on the ball quickly it’s hard to defend.”

Florida is back at the O Dome with another tournament this weekend. They will face the likes of Liberty, Northern Arizona and Lafayette.