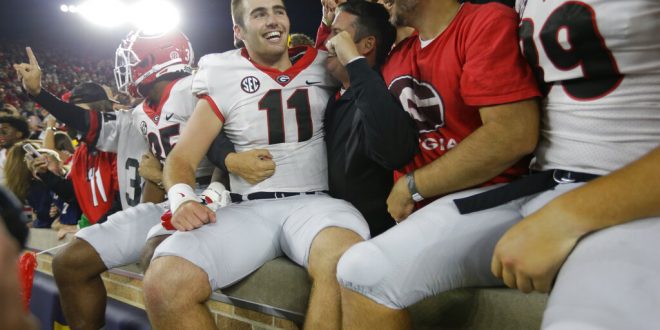 FILE - In this Sept. 9, 2017, file photo, Georgia quarterback Jake Fromm (11) celebrates in the stands following a 20-19 win over Notre Dame in an NCAA college football game in South Bend, Ind. Two years ago, cheered on by a sea of red in the shadow of Touchdown Jesus, Georgia signaled its re-emergence as a national powerhouse with a victory at Notre Dame. Now, it's the rematch with the No. 7 Fighting Irish playing between the hedges for the first time against the third-ranked Bulldogs. (AP Photo/Michael Conroy, File)

Success for the Bulldogs

The Georgia Bulldogs are sitting pretty during bye week with a 4-0 record and now a top-ten win under their belt. Last week’s game against Notre Dame was closer than most expected it to be. The No.7 Fighting Irish led the Bulldogs for the entire first half of the game. The momentum changed after an interception by Georgia’s Divaad Wilson and by the fourth quarter, the Fighting Irish were trailing by 10. Notre Dame tightened the score up again at four minutes left in the game with a touchdown by Chase Claypool. Although, the Bulldogs held it down and took home the win.

After three blow-out wins in a row for the Bulldogs, the fight put up by  Notre Dame might have been a wake up call. The No. 3 team has this week off, but the things they need to work on are more evident now. In the past, head coach Kirby smart has referred to open week as “the work week”, and that’s exactly what it will be.  The Bulldogs have done well with a relatively easy schedule so far, but they’re taking advantage of this week to prepare for their upcoming SEC opponents. They’ll face Tennessee, South Carolina and Florida in their next three games.

Kirby Smart says the team is defining their run-game as they prepare for upcoming conference games.

Smart has noted before how difficult it is to keeping players focused when they don’t have an opponent to face that week. There’s no doubt they’ll focus heavily on individual performance during the bye week, but there is some unfamiliar territory they’ll need to prepare for.

As Georgia enters conference play, they’ll face multiple quarterbacks they’ve never seen before. If Brian Maurer takes over QB for Tennesse like he did against Florida, this will be the first time the Bulldogs seem him. The same goes for Ryan Hiliniski (South Carolina), Kyle Trask (Florida), Kelly Bryant (Missouri), Bo Nix (Auburn) and Kellen Mond (Texas A&M).