Home / College Basketball / Zada Williams on and off the court

Zada Williams on and off the court

Just give it your all. Don’t hold back, don’t second guess yourself. And just work hard, it’s all you can tell someone. These are just some of the words of wisdom from Zada Williams, a redshirt senior on the Florida Gator Women’s Basketball team.

Her college career started out with playing two seasons at Miami. During her time there, she scored just 57 points. In 2017, she transferred to Florida, sitting out that season due to NCAA rules. And now, she’s going into her second season as a Gator. She is just one of two seniors on this year’s team, providing guidance and advice to the eight underclassmen. Through her college career, she’s gained wisdom to share with her young team – advice that can be used on and off the court.

Zada Williams: on the court

As a six-foot, two-inch forward, a lot of work on the court is around the basket. In her first season on the court for Florida, she totaled 150 rebounds. That was the second best on the team, averaging close to five grabs per game. Furthermore, she matched that by putting up points on the offensive end, averaging eight a game. With her consistency in both point scoring and rebounding, she was also able to shine on the defensive end. She had 24 steals and nine blocks on the season, some of the highest numbers on the team.

But despite this work, last year’s season didn’t pan out the way the team may have wished. The team won just eight games – six of those at home. That left this Florida Gator team with 23 losses.  In her senior season, Williams’ wants that win-loss record to change, to improve. And she’s confident that it will, because of the increased chemistry with this new roster. She said this newfound camaraderie will transfer on the offensive end of the court.

Williams also discussed how proud she is of the new freshman on this year’s roster. It includes additions like forward Faith Dut and guard Nina Rickards, both in the top 100 in the ESPN scouts grade. There’s also six-foot, one-inch guard Lavender Briggs, an ESPN five-star recruit.

With this plethora of talent brought in by head coach Cam Newbauer, Williams’ says everyone is working extra hard in preparation for the season.

Zada Williams: off the court

With her balanced talent on both ends of the basketball court, there’s also the Zada Williams to get to know outside of the basketball gym. In high school, she was a three-sport athlete, also playing volleyball and track & field. She was on a chess team growing up. She says that if she were to have her own talk show, her first three guests would be Lebron James, Oprah Winfrey and finally her mother. But perhaps the most interesting fact? She loves the smell of Comet. The Florida Gator Women’s Basketball twitter page found out more about her life outside of the sport.

Williams said that it’s very important for her to see growth in this program in her final season. For Williams’ she said that the team this year is very different.

“We truly care about each other now,” Williams said. “We’ve done extra to build that chemistry on and off the court.”

With high praise for the new team, it will be interesting to see how it transfers to the court in this upcoming season. The 2019-20 season starts with an exhibition game in just a couple weeks. The Gators will open up play against Valdosta State on Oct. 30 here in Gainesville. 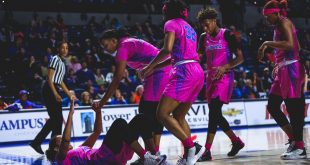