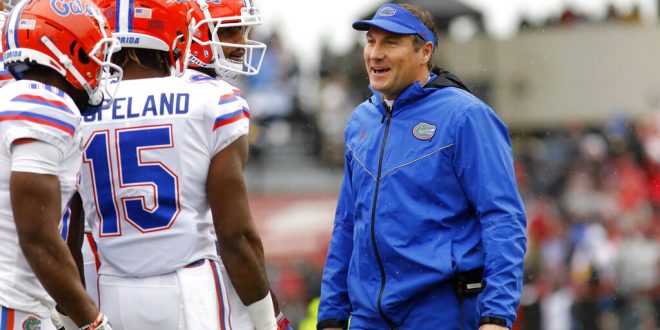 Gators Get Much Needed Bye Week

The Florida Gators enter a bye week following a 38-27 victory against the South Carolina Gamecocks. This well-deserved by week comes after the Gators had three tough matches against very strong teams.

It all started in Homecoming when the Gators hosted then-ranked No. 7 Auburn Tigers. Even after a few mistakes the Gators were able to get the victory 24-13 and continue their undefeated season.

This undefeated season was then jeopardized when they traveled to Baton Rouge to face the LSU Tigers. The Gators were able to keep the game close and even take the lead in the third quarter. But with key defensive players Jonathan Greenard and Jabari Zuniga out early on the game due to injuries, Florida’s defense was not able to stop the Tigers’ offense.

The Gators then redeemed themselves with a victory over South Carolina. The Gators knew this game would not come easy with two of their starting defensive players out.

The Gamecocks were also coming out of a victory over now ranked No. 10 Georgia.

The Gators had a rough start with a few miscommunications in the offense and the defense not being able to stop South Carolina in the running game. At the end, the Gators were able to outscore the Gamecocks to get their seventh win of the season. They keep their eligibility for the SEC East Championship.

Plans for the bye week

Every game from now on is key for the Gators to win the SEC East. This bye week is the perfect recovery time for the Gators as they prepare for another top-10 matchup against Georgia. Coming out of some tough games the Gators now have a chance to properly prepare for their match against the Bulldogs.

Gators center Nick Buchanan says that this bye week will all be focused on game planning.

“I’m looking forward to getting to practice on Tuesday, getting the game plan in and getting better at the little things.”

Redshirt sophomore defensive end Zachary Carter also believes that this next two weeks are all about preparing for a big game.

This will also serve as recovery time for key players that have been out due to injury. Both defensive lineman Jabari Zuniga and linebacker Jonathan Greenard suffered ankle injuries following the Florida-LSU game. Their injuries were not season-ending injuries and head coach Dan Mullen is positive that they will be ready for practice soon.

“I’m extremely optimistic… by medical standards and timing I’m very optimistic that they’ll be good to go by next Monday’s practice. Game week, at least by Tuesday at the absolute latest to practice for Georgia.”

Mullen also believes that this bye week helps the younger players participate more in practice and get ready to go on the field.

Following the win against the Gamecocks, the Gators moved back up to No. 7 in the AP Poll and are still eligible for the SEC East Championship.

The Gators now have just a few games remaining in their regular season schedule.

Camila is a senior at the University of Florida, who served as a beat writer for the women's basketball team from 2019 until the 2021 season. She was also a beat writer for the Gators football team during the 2020 season. Camila is also WUFT's news director as well as a sports reporter/anchor.
@CamilaMaffuz
Previous Monday Night Football: Patriots Face Jets in AFC East Clash
Next Bridgewater Stepping Up to the Opportunity