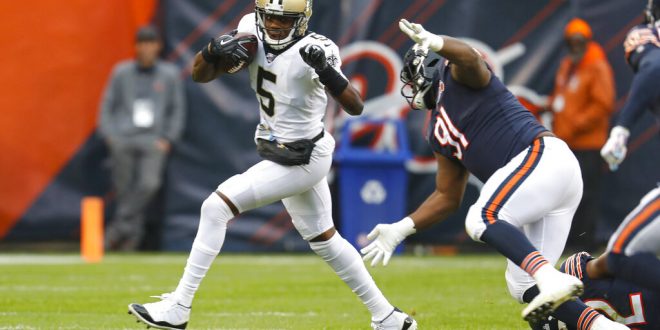 Bridgewater Stepping Up to the Opportunity

Adversity. Something Teddy Bridgewater is all too familiar with. Despite injuries and other obstacles, Bridgewater is thriving under center for the Saints. His survival skills and confidence have contributed to his recent success.

Since taking over on September 15, Bridgewater has led the New Orleans Saints to five straight wins. Bridgewater stepped in when star quarterback Drew Brees went down with a thumb injury.

Many fans and reporters alike questioned if the Saints would recover from the Week 2 loss without Brees. Some even had a grim outlook for the rest of the season as Bridgewater stepped in for the veteran. However, Teddy has come to play and has the support of the team behind him.

It was clear in last night’s road victory against the Bears that Bridgewater has no qualms leading the team. He recorded 281 yards in the air and threw for two touchdowns with zero interceptions.

Even with injuries to running back Alvin Kamara and tight end Jared Cook, Bridgewater still found a way to get points on the board. He also helped his team put together arguably the best game of the season so far. Bridgewater said following the win that he feels the team is playing complete football right now. He believes that there is always room for improvement moving forward.

5️⃣ in a row for Teddy B! #SAINTS pic.twitter.com/KLb1QovJPJ

Saints Head Coach Sean Payton has known that Bridgewater had the ability to be successful in this role. He recognizes the value he adds to the team, both as a person and as a leader.

For now, the team is projecting to have Brees back taking snaps by Week 8 in the game against the Arizona Cardinals. But, with the way the team and Bridgewater have continued to get the job done, there may be no rush to get their star back until he is fully healthy and ready to compete. Though the injury to Brees wasn’t ideal, the result of his absence created depth for the team and the opportunity for Bridgewater to have his piece of purpose on the team.

With the respect he has gained from his team and teams across the NFL, Bridgewater has proved he can deliver when his number is called. For now, Bridgewater will finish out the season in New Orleans, but the 26-year old only is on a one year contract with the team and may find himself with options after stepping up and delivering for the Saints when they needed him most.