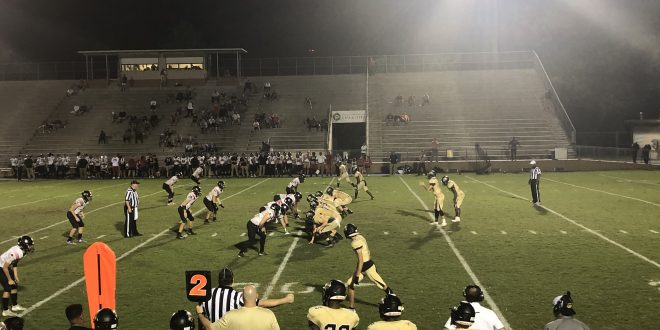 Buchholz junior running back Quandarius Smith had never lost a fumble this season.

The Bobcats had the ball at their their own 20 with three minutes remaining in the game. A couple drives prior, Buchholz just finished off a 14-point comeback in the fourth quarter to take the lead 17-14.

They were trying to kill the clock to win the game and keep the Creekside Knights (3-5) from having a chance at a game-winning touchdown drive.

Smith has been Buchholz’ workhorse all season and has the coaches’ trust with the game hanging in the balance.

Bobcat quarterback Jack Hevesy handed the ball off to Smith. He was running left and then a Knight defender hit him hard and pried the ball free.

The Knights scooped up the loose football and took it to the Bobcats’ 22-yard line before being stopped. Smith’s fumble was his first of the season.

The first play after the turnover Knights quarterback Quinn Sieger threw a short pass to wide receiver Christian Yousefzadeh in the backfield with Creekside blockers in front of him. Yousefzadeh was led by his convoy of blockers to the end zone to regain the lead 21-17 with two minutes to play.

The Bobcats had one last shot at winning the game but an Hevesy incompletion on fourth down ended their chances.

Creekside would end up killing the rest of the clock and stunning Buchholz at home on their senior night. The Bobcats fall to 4-5 on the season and 2-3 in district games.

“Quandarius Smith is our bread and better,” said Buchholz head coach Mark Whittemore. “That was his first fumble lost all year.”

Whittemore said he still believes he is in that upper echelon of tailbacks, and stuff like that happens to the best of players. He also said he is thankful he is a junior and will have an opportunity to come back and get better.

Neither team scored in the first quarter, but Creekside got on the board first 7-0. Sieger tossed a 38-yard touchdown pass to receiver Robert Kriwer.

Before halftime, they added to their lead on an 77-yard touchdown strike from Sieger to wide out Jack Goodrich.

Buchholz didn’t score any points in the contest until a play after a great punt put the Knights backed up against their own goal line. The next play the Bobcats’ defense caused a safety to give themselves life to get back in the game.

They also scored again when Hevesy launched a strike after rolling out of the pocket to Damien Curtis for an 80-yard touchdown pass to make the score 14-9.

Smith finally found the end zone on a 14-yard run from the wildcat quarterback position to take the lead 15-14. Coach Whittemore and his team elected to go for two and converted to take a three point lead 17-14.

“At halftime, we started using two tight ends and did some different stuff in the running game to get Smith free,” said coach Whittemore. “He had some good little runs to sustain some drives.

“We also threw a post to our fastest guy (Curtis), and he came up with a big catch. He had three or four big catches tonight, so I thought our adjustments were good offensively and defensively.”

Creekside scored the game-winning touchdown on a halfback screen to Yousefzadeh after Smith’s costly fumble to get to the final score of 21-17.

Buchholz will travel to take on Santa Fe in their regular season finale on Nov. 1 at 7:30 p.m.

Zachary Huber is a journalism student specializing in sports media at the University of Florida. This is his first year being a part of ESPN Gainesville. He helps cover high school football for Buchholz and Newberry High Schools. You can follow him on Twitter @zacharyahuber
Previous Loferski Sees Red in Gators Loss to Tennessee
Next High School Football Roundup

High school football playoffs are just starting to heat up. And a few local teams …