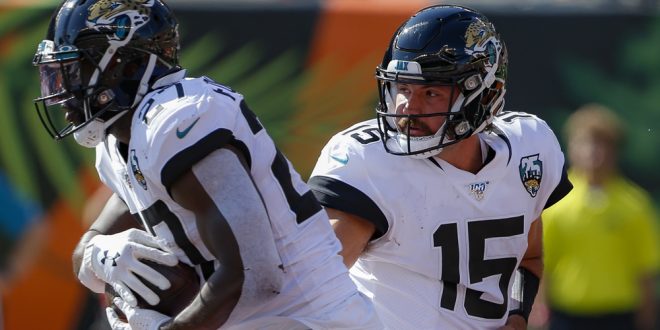 Jacksonville Jaguars quarterback Gardner Minshew (15) hands off the ball to running back Leonard Fournette (27) in the first half of an NFL football game against the Cincinnati Bengals, Sunday, Oct. 20, 2019, in Cincinnati. (AP Photo/Gary Landers)

Jets Travel to Jacksonville to Face the Jaguars

Last weekend the Jaguars beat the Cincinnati Bengals, 27-17, and the Jets were shutout by the New England Patriots, 33-0.

Jets Looking to Bounce Back

After a grueling loss to the Patriots, the Jets are looking for a win. The only game the Jets have come out victorious was two weeks ago when they handed the Dallas Cowboys a loss, 24-22.

Quarterback Sam Darnold struggled on the field against the Patriots defense, only completing 11 passes for 86 yards and four interceptions.

In addition to Darnold’s poor performance, the rest of the offense was non-existent last weekend, with the exception of Le’Veon Bell. The running back carried 15 times for 70 touchdowns, giving the Jets some running game.

Darnold is ready to turn the corner when they travel down to Jacksonville.

However, if they want to beat the Jaguars on Sunday, the Jets have to put some more fuel into their tanks to take down Gardner Minshew and his team.

Coming off the win against the Bengals, the Jaguars are looking to defend their home turf after losing at home against the Saints two weeks ago.

Despite beating the Bengals last weekend, Minshew found difficulty completing passes with a 46.8% completion rate. He’s been on a downfall since Week 6, so the question is if he can outperform his recent stats against the Jets.

Fortunately for the Jaguars, they have running back Leonard Fournette who had 29 rushing attempts for 131 yards against the Bengals.

However, their main issue lies within the red zone, and Minshew is aware of it.

If Minshew can perform as he did in previous weeks, and trust his offense to get the ball down the field, the Jaguars can put another win on their record.

I am a fifth-year journalism major, specializing in sports and media. My favorite sport to watch and cover are college and NFL football. When I'm not doing that, I enjoy hanging out with my cat, going to concerts and traveling.
@sportsabrina
Previous Revamped Thunder looks for success
Next Astros need to stop the bleeding in Washington 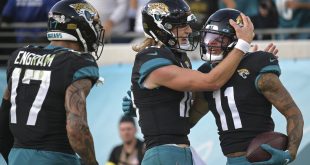