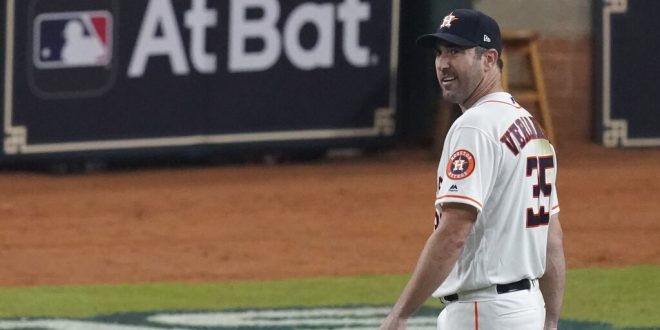 Houston Astros' Justin Verlander leaves the game during the seventh inning of Game 2 of the baseball World Series against the Washington Nationals Wednesday, Oct. 23, 2019, in Houston. (AP Photo/Eric Gay)

Astros need to stop the bleeding in Washington

The Houston Astros find themselves staring down at a 2-0 World Series deficit to the Washington Nationals. But, how can AJ Hinch and Co. fight back into the series?

Wake Up the Bats

Jose Altuve could burn the sun. He’s been hot this postseason. But it seems like the rest of the Astros might be on vacation in Siberia.

If the Astros want to keep their title hopes alive their lineup needs to get going, especially Alex Bregman. The MVP front runner is batting .125 for this World Series and .233 this postseason with just six runs batted in.

Superstar shortstop Carlos Correa is batting under .200 for the whole postseason with 22 strikeouts, including .111 and four Ks in the Fall Classic. Yuli Gurriel is only batting .231 but he has 10 RBIs and his .333 series average shows a trend in the right direction.

Jose Altuve, Alex Bregman, Michael Brantley and Yordan Alvarez are 5 for 43 (.110) with RISP in these MLB Playoffs.

Astros clutch hitting has been a problem, but it hasn’t been everybody.

As a team, they can’t string hits together for big innings. The ‘Stros are hitting .175 with runners in scoring position with 26 RBIs this postseason. The Nationals? Forty-one RBIs off a .320 average.

“Everyone here knows how to bounce back,” Bregman said following Game 2. “We’ve done it before in the postseason and we’re going to go to Washington with our heads held high and get after it.”

Manager AJ Hinch said his team needs as much offense as it can get. Inserting rookie Yordan Alvarez into the lineup could pay off for Houston. He has three hits in just six at-bats in the series.

Get a Quality Start

The Nationals trounced Houston’s terrible twosome of Justin Verlander and Gerrit Cole. Yes, Cole went seven innings but he was also knocked around for five runs on eight hits. Verlander only went six but gave up four runs on seven hits.

Game 3 starter Zack Greinke only has one quality start this postseason: three earned runs over six in a 7-0 loss to the Yankees on Oct. 12. His overall postseason earned run average is over 6 and doesn’t have a win yet.

The first time Aníbal Sánchez and Zack Greinke started against each other was September 9, 2012.

Also, Avisaíl García pinch-ran for Miggy in the 9th.

Here are the starting lineups from that game: pic.twitter.com/jmaLxvjSL2

Greinke will need a strong outing to help out a bullpen that has been utilized a lot this postseason. But more importantly, he needs one or else his team likely won’t win the World Series.

It’s time to right the ship for the Astros or they could end up watching what the Dodgers did when Houston won it all: an organization winning its first World Series.

Previous Jets Travel to Jacksonville to Face the Jaguars
Next Missouri looks to bounce back against an injured Kentucky team.